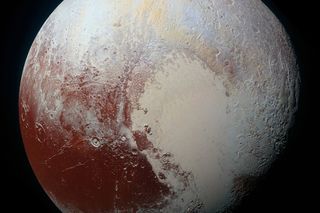 Apologies to all of the Pluto-isn't-a-real-planet folks out there but researchers have found a way in which this ever-surprising world acts more planet-like than dwarf-like: how it interacts with the solar wind.

During New Horizons' flyby through the Plutonian system in July 2015, the spacecraft's Solar Wind Around Pluto (SWAP) instrument measured what happens when charged particles streaming out from the sun interact with Pluto's atmosphere.

What was observed was a much less subtle comet-like interaction (as had been previously suspected) and more a hybrid comet/planet behavior, with the solar wind being deflected abruptly but relatively close to its upwind-facing surface.

"This is a type of interaction we've never seen before anywhere in our solar system," said David J. McComas, professor of astrophysical sciences at Princeton University and lead author of the study. "The results are astonishing."

Surprisingly, Pluto is able to maintain a gravitational grasp on much of its thin atmosphere even as ions are being stripped away by the solar wind into a long tail (which, by the way, is also found on other planets like Earth.)

"These results speak to the power of exploration," said Alan Stern, New Horizons principal investigator. "Once again we've gone to a new kind of place and found ourselves discovering entirely new kinds of expressions in nature."

Video: What Did We Learn from That Pluto Flyby?

The findings were published on May 4, 2016 in the Journal of Geophysical Research – Space Physics.

Learn more about Pluto and the New Horizons mission here.