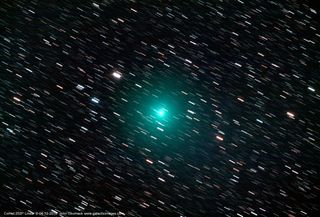 The green glow of  a spring comet lights up this stunning image.

"It is easily visible in binoculars under dark skies, and is fairly large and diffuse ... so it may look like a faint open star cluster," Chumack wrote to Space.com.

Comet 252P/LINEAR is a periodic comet and near-Earth object discovered by the LINEAR survey on April 7, 2000. The comet's core is estimated to be 750 feet (230 meters) across. In March, Comet 252P/LINEAR made a close flyby of Earth alongside a second comet (called BA14).