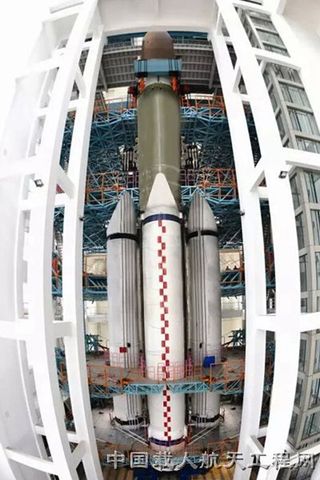 China continues to ramp up its space plans, which include a Mars rover mission set to launch in 2020.

Chinese officials have been discussing the Mars rover and other projected upcoming space initiatives — including moon missions and the construction of a space station in Earth orbit — recently, to help mark a "National Day of Spaceflight."

That day, which was celebrated on April 24, commemorated the 46th anniversary of the launch of Dongfanghong No. 1, China's first satellite. [Latest News About China's Space Program]

Over the years, China has launched its Long March series of carrier rockets 226 times, with a success rate of over 96 percent, noted Xu Dazhe, administrator of the China National Space Administration.

Xu explained in a televised April 22 briefing that in 2016 — the beginning of China's 13th Five-Year Plan — China's Mars Exploration Project has been officially approved, the National Civil Space Infrastructure Construction has been established, the moon-bound Chang'e-4 mission has been initiated, the Chang'e-5 lunar project has entered a key stage and the Beidou Navigation System has accelerated integration with global networking.

The "non-poisonous and pollution-free" Long March 5 and 7 boosters are also due for their maiden flights this year, Xu added in the briefing. (You can read a translated transcript of the speech here.)

Xu also noted that China has in place more than 100 cooperation agreements signed with 30 state-level space institutions and international organizations.

"Starting from this new point, we are willing to take a more open attitude and collaborate with other countries to compose a new chapter in space exploration and contribute to human welfare," Xu said.

"The Mars mission marks China's entry into the de facto phase of deep-space exploration. Even though our spacecraft have already entered deep space, we need the Mars mission to help us improve our understanding of deep space," Xu said, according to China.org.cn.

Xu had reported earlier that the Mars mission is expected to orbit the Red Planet, land and deploy a rover all in one go, "which is quite difficult to achieve."Xu said the Mars project was approved by central authorities in January, according to the state-run news agency Xinhua.

Xu stressed the Mars mission's importance and difficulty, saying that, although China has already sent spacecraft deep into space, "only by completing this Mars probe mission can China say it has embarked on the exploration of deep space in the true sense," Xinhua reported.

Xinhua also reported that China is working on its own reusable rocket technologies.

Ma Zhibin, deputy director of CALT’s aerospace department, also confirmed to Xinhua that Chinese scientists are working on reusable rockets, although the technologies they employ may differ from those of Elon Musk and his SpaceX rocketeers.

"There is of course more than one way to do this … I believe we could see some serious results during the 13th Five-Year Plan period," Ma told Xinhua, referring to the five years between 2016 and 2020.

In related Chinese space news, Wang Zhongyang, spokesman with the China Academy of Space Technology (CAST), detailed more about the upcoming launch of the country’s second space lab, Tiangong-2, which is scheduled to lift off in the third quarter of this year.

Tiangong-2 is assigned various duties, including carrying out space science experiments and repair tests as a prelude to China's first orbital space station, which is expected to be in service around 2022.

Wang said Tiangong-2 has been modified from its predecessor, Tiangong-1. Those modifications will make the space lab more livable for crews.

"Unlike Tiangong-1, Tiangong-2 will be our first genuine space lab," Wang said, according to China Daily. A two-person Shenzhou-11 spacecraft is to be linked to Tiangong-2 in the fourth quarter of this year. The two male Chinese astronauts are expected to partake in a 30-day mission in the new space lab before returning to Earth.

The yet-to-be-identified Chinese astronauts are currently receiving training for the mission.

Tiangong-2 and China's first space cargo ship, Tianzhou-1, are to link up in the first half of 2017. Tianzhou-1 is to be orbited via a next generation Long March-7 rocket. During that mission, Chinese space authorities aim to verify key technologies such as in-space propellant refueling, China Daily reported.

Leonard David is author of "Mars: Our Future on the Red Planet," to be published by National Geographic this October. The book is a companion to the National Geographic Channel six-part series coming in November. A longtime writer for Space.com, David has been reporting on the space industry for more than five decades. Follow us@Spacedotcom, Facebook or Google+. Originally published on LeonardDavid.com.