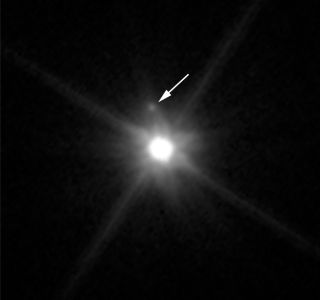 This photo by NASA’s Hubble Space Telescope reveals the first moon ever discovered around the dwarf planet Makemake. The 100-mile-wide (160 kilometers) satellite is barely visible just above Makemake, almost lost in the glare of the bright dwarf planet.
(Image: © NASA, ESA, and A. Parker and M. Buie (SwRI))

The dwarf planet Makemake has some company out in the cold, dark depths of the outer solar system.

Astronomers using NASA's Hubble Space Telescope have discovered a moon orbiting Makemake, which is the second-brightest object in the distant Kuiper Belt beyond Neptune. (Pluto is the brightest of these bodies.)

The newfound satellite — the first ever spotted around Makemake — is 1,300 times fainter than the dwarf planet and is thought to be about 100 miles (160 kilometers) in diameter, researchers said. The moon was spotted 13,000 miles (20,900 km) from the surface of Makemake, which itself is 870 miles (1,400 km) wide. [See images of the dwarf planet Makemake]

"Makemake is in the class of rare Pluto-like objects, so finding a companion is important," Alex Parker of the Southwest Research Institute (SwRI) in Boulder, Colorado, who led the image analysis for the Hubble observations, said in a statement today (April 26).

"The discovery of this moon has given us an opportunity to study Makemake in far greater detail than we ever would have been able to without the companion," Parker added.

For example, further observations of the moon — which has been provisionally named S/2015 (136472) 1, and nicknamed MK 2 — should allow astronomers to calculate the density of Makemake, which should  tell them if the dwarf planet and Pluto are made of similar stuff.

Additional Hubble observations should also reveal the shape of MK 2's orbit around Makemake. If the orbit is tightly circular, the moon was probably created by a long-ago giant impact, just like the five satellites in the Pluto system were, researchers said. A looping, elliptical orbit, on the other hand, would suggest that MK 2 was once a free-flying Kuiper Belt object that Makemake captured.

The Hubble discovery images suggest that MK 2 is as dark as charcoal, which seems surprising given that Makemake is so bright. One possible explanation is that the moon's gravity is too weak to hold onto reflective ices, which sublimate off MK 2's surface into space, researchers said.

Makemake orbits the sun at an average distance of 45.7 astronomical units (AU) and completes one lap around the star every 309 Earth years. (One AU is the Earth-sun distance — about 93 million miles, or 150 million km.) The dwarf planet is even farther away than Pluto, which lies 39.5 AU from the sun on average and orbits once every 248 Earth years.

Makemake is one of five objects officially recognized as a dwarf planet by the International Astronomical Union (IAU). The others are the Kuiper Belt denizens Pluto, Eris and Haumea, and Ceres, which lies in the main asteroid belt between Mars and Jupiter.

Ceres is the only one of these five that doesn't have at least one moon.

The IAU defines a dwarf planet as an object that orbits the sun and is massive enough to have been forced into a spherical shape by its own gravity but has not "cleared its neighborhood" of other orbiting material. (Pluto falls short on this last count, according to IAU officials, which is why the former ninth planet was reclassified as a dwarf planet in 2006.)

MK 2 was spotted in observations made by Hubble's Wide Field Camera 3 in April 2015, after several previous Makemake observation campaigns had failed to turn up any satellites.

"Our preliminary estimates show that the moon's orbit seems to be edge-on, and that means that often when you look at the system you are going to miss the moon because it gets lost in the bright glare of Makemake," Parker said.