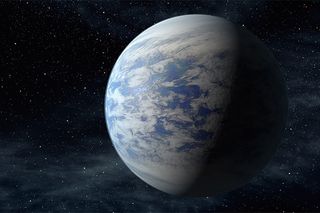 A new study suggests that at least one super-Earth — a planet that is larger than Earth, but smaller than Neptune — could have formed close to the sun. Over time, this hypothetical super-Earth would have swept up all the debris in the area. Then, it would have succumbed to the sun’s gravity and gotten eaten.

This could be a possible explanation for why nothing is seen within the orbit of Mercury, although for now the evidence is based on modelling and the fact that the region between Mercury and the sun is so barren, the authors say.

"The only (physical) evidence that super-Earths could have formed in our solar system is the lack of anything in that region, not even a rock," said lead author Rebecca Martin, an assistant professor at the University of Nevada, Las Vegas, in an email to Discovery News. "So they could have formed there sweeping up all of the solid material, but then later fell into the sun."

Observations of super-Earth exoplanets outside the solar system suggest they could have formed in two locations: in situ (where you see them today) or farther out from their observed locations, where of course they would have migrated over time.

For them to be formed in situ, the super-Earths would have to slowly build up from debris in the "dead zone" of a forming planetary system, known as a protoplanetary disc. This would only happen if there is a lot of turbulence in this area, fueled by magnetism of the surrounding material.

"The size of the dead zone must be large enough that it lasts for the entire disc lifetime," Martin added. "Since different systems may have different dead zone sizes, formation in the inner parts may not be possible in all systems and thus both formation locations may be operating."

Of the super-Earths that have been observed, the researchers noted two distinct types depending on their density. They conclude that planets that form farther out in the disc would be less dense, since water and other volatiles will freeze out in the cooler outer parts of the disc. Those that are closer one would be denser.

So what about our own solar system? The researchers speculate that here, super-Earths formed in situ and swept up all the material inside of Mercury's orbit. "If the disc is sufficiently cool, the migration timescale for them to fall into the sun is short enough for this to happen in the lifetime of the disc," Martin said. But more research will be needed to confirm this.

The research was accepted for publication in the Astrophysical Journal, and is now available in preprint version on Arxiv.