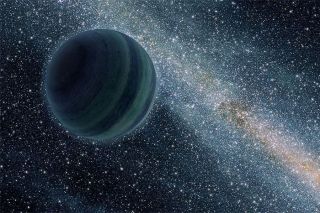 This is an artist's impression of an orphaned or "rogue" planet — a world that has become excited from its parent star and is drifting through interstellar space.
(Image: © NASA/JPL-Caltech)

After an unprecedented survey to look for Earth-like planets beyond the solar system, NASA's Kepler space telescope this week begins a search for free-flying planets to learn just how common orphan worlds may be.

Planets without host stars are difficult to find, but they do exist. Scientists believe these bodies were ejected from their solar system families due to gravitational dynamics, lured away by tidal forces from interloping passersby, or perhaps even formed without the benefit of a parent star. What they don't know is if orphan planets are common or not.

To find the free-flying worlds, astronomers are turning to a technique known as microlensing, which occurs when the background light of a star is distorted due to the gravitational effects of another, unseen body located between the star and the observing telescope.

"For a lensing event that's due to a just a single object, the most salient feature of the light curve is the time scale. In general, a shorter time scale is potentially indicative of a lower-mass lensing object," said astronomer Calen Henderson, with NASA's Jet Propulsion Laboratory in Pasadena, Calif.

The time scale for a lensing event caused by a free-floating planet may last just days or even hours, he added.

"If you're just monitoring one star, it's very, very rare to capture a microlensing event. That would only happen once per individual star every maybe 300,000 years," Henderson told Discovery News.

"It's a fishing expedition. Microlensing events are rare. They're unpredictable and so what microlensing surveys have done for decades is just try to play the numbers game," he said.

Ongoing ground-based surveys boost the odds of capturing a microlensing event by focusing on tens of millions or even hundreds of millions of stars, looking for targets that brighten within short time periods.

While some variations in a star's brightness are due to stellar flares or because the star is what is known as a cataclysmic variable and periodically erupts, other changes are caused by unseen bodies in the foreground warping the light of the background star.

"What we're going to try to do with K2 is look for those events that are due to a lensing system that is just a free-floating planet," Henderson said.

To accomplish that, the K2 team will work in conjunction with ground-based surveys to try to get two perspectives of a lensing event, which will allow astronomers to calculate the mass what is causing the lensing.

"It's the first chance that we will have to actually measure the masses of these objects and the first chance to find out if the ones we find that are low-mass are (gravitationally) bound to a host star or not," Henderson said.

Scientists believe that they will be able to detect free-floating planets about the size of Saturn or larger with the technique.

K2's hunt for orphan worlds began on Thursday and is scheduled to last until July 1.

A white paper on the project was released at the American Astronomical Society meeting in Orlando in January.