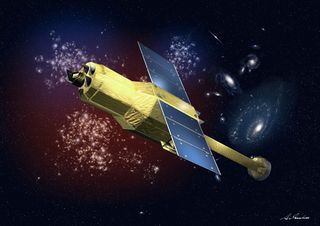 The Japanese Aerospace Exploration Agency (JAXA) lost contact with the Hitomi satellite on March 26, 2016, at the same time debris was seen near the satellite's orbit. The satellite is intended to investigate high-energy phenomena in the universe.
(Image: © JAXA)

Elizabeth Tasker, an astrophysicist at Hokkaido University in Japan. Elizabeth received her doctorate in astrophysics from the University of Oxford and a Master in Science in theoretical physics from Durham University. Her articles on astronomy and space science have appeared in a range of publications, including Scientific American, Astronomy Magazine, Nautilus and The Conversation. You can follow her on twitter @girlandkat. Tasker contributed this article to Space.com's Expert Voices: Op-Ed & Insights.

At 4:40 p.m. JST (07:40 GMT) on Saturday, March 26, scientists at the Japanese Aerospace Exploration Agency (JAXA) waited to communicate with the five-week-old X-ray space observatory Hitomi. They were met with silence.

The prospect of losing a spacecraft is the nightmare of every space scientist. Each mission is painstakingly selected for its potential for scientific discovery. Even more than cost, the loss of the observatory's knowledge is a terrible blow. And for Hitomi, the science stakes have never been higher.

At the edge of black holes

Hitomi's name comes from the Japanese word for "eye pupil." But unlike our eyes that focus visible light, Hitomi's four telescopes focus X-ray radiation. X-rays have far shorter wavelengths than visible light, corresponding to a much higher energy. To gain the energy needed to emit X-rays, gas must become extremely hot, with temperatures exceeding millions of degrees. This lets X-rays probe for the most violent events in the universe.

Buried in the center of nearly every galaxy is a supermassive black hole. The gravitational pull from these cosmic beasts, millions to billions of times the size of our sun, whips the encircling gas to incredible temperatures and bathes the galaxy in X-ray radiation.

This region of black hole and gas is known as an active galactic nucleus (AGN), and it is the site of the most extreme conditions in the universe. The highest-energy X-rays are emitted close to the black hole's edge. These reflect off of the surrounding material, producing a spread of wavelengths through the X-ray range that depends on the structure of the gas.

This structure has intrigued astrophysicists for more than 40 years. The energy emitted from AGN strongly affects the evolution of the galaxy, while the motion of gas is a test bed for physics at its limits. Understanding these processes requires knowing the gas conditions that are revealed in the radiation. With four X-ray telescopes and a gamma-ray detector for even shorter wavelengths, Hitomi is sensitive to radiation in wavelengths from 4 to 0.002-nanometers. This combination of a wide wavelength range and extreme sensitivity surpasses previous satellites' abilities to probe the innermost mysteries of the AGN.

Hitomi's flagship instrument is a spectrometer to measure the strength of X-rays at different wavelengths. This is equivalent to measuring the intensity of colors in visible light. Called the soft X-ray spectrometer (SXS), this instrument is 50 times more sensitive than instruments on previous missions to the differences in X-rays emitted by sources that stretch across huge areas.

One such source is galaxy clusters. Containing hundreds to thousands of individual galaxies, these extended structures are full of hot gas. And even more intriguing, they might contain a signature of the most elusive puzzle in astrophysics: dark matter.

Dark matter makes up roughly 84 percent of all the matter in the universe, yet nobody knows what it is. While dark matter does not emit radiation, one possibility is that it's a particle that decays into X-rays. Such decay would be rare, but a huge galaxy cluster could contain enough events to produce a detectable signature. Possible detections have been reported in the past two years, but are these really from elusive dark matter?

Tesla Jeltema, an astronomer at the University of California, Santa Cruz, is skeptical. She believes the detection is most likely from more regular particles, such as hot potassium or sulfur.

The two options can be distinguished, but an accurate measurement of the X-ray wavelength from Hitomi's SXS is needed.

In a cruel twist of fate, the SXS on Hitomi is the fifth attempt at such an instrument. A similar design was initially considered for two NASA missions, but the plans were scrapped. The spectrometer then became part of the JAXA ASTRO-E mission, but a failure during launch sent the satellite into the ocean. It finally flew on the replacement mission, ASTRO-EII, which became the Suzaku satellite once in space. Despite Suzaku's success over 15 years of operation, the spectrometer failed to collect data due to a leak in the coolant.

It is a chronology that belongs in a science fiction book, if anyone would be heartless enough to write such a tale.

Since communications with Hitomi failed on Saturday, the news has been limited and speculative. Observations from ground stations ominously confirmed the presence of debris around the satellite's position. However, JAXA have received a fleeting signal four times since the debris was seen, raising hopes that the satellite is not completely inactive.

The SXS had previously been operating well over the past month, and scientists have yet to review all of that data. Although the amount of data is small compared to what would have been collected over the planned three years of the mission, there could be interesting results in the pipeline. However, whether a partial recovery of Hitomi is ultimately possible may not be known for a while.

The loss of Hitomi would be a hard hit for X-ray astronomy. No current telescope can replicate its data because it was the only observatory to have the groundbreaking SXS instrument and access to the range in wavelengths at that sensitivity. The current X-ray satellites also lack Hitomi's versatility or were launched in the late 1990s, making the duration of their remaining operation time uncertain.

The next planned mission is the European Space Agency's Athena telescope, which is due to launch in 2028. This leaves a sizable hole in time to be filled with old technology. Jonathan McDowell, an astronomer at the Harvard-Smithsonian Center for Astrophysics, told Space.com that "The loss of Hitomi (would) leave a big gap in the world's capability."

The need for Hitomi was further increased by the announcement in February of a gravitational wave detection from merging black holes. Future events will need matching radiation observations to further test Einstein's predictions for the nature of space itself. However, the astronomy community may have to hold out for a miracle.