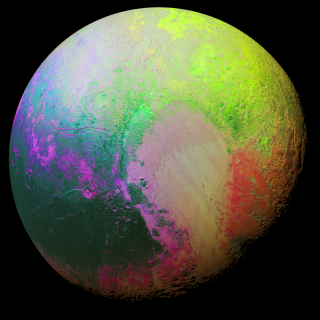 An enhanced color image of Pluto reveals the different material on the surface on the complex dwarf planet.
(Image: © NASA/JHUAPL/SwRI)

THE WOODLANDS, Texas - As recently as 800,000 years ago, Pluto may have had an atmosphere thicker than that of Mars today, potentially allowing liquids to run across its surface.

Newly analyzed data collected by NASA's New Horizons spacecraft, which performed the first-ever flyby of Pluto last July, suggest that the dramatically changing seasons of the dwarf planet could have resulted in an atmosphere that waxed and waned. Other results, meanwhile, strengthen the idea that Pluto's five moons were born in a powerful collision billions of years ago.

"Pluto's atmospheric pressure varied over millions, even billions of years," New Horizons principal investigator Alan Stern, of the Southwest Research Institute (SwRI) in Boulder, Colorado, announced yesterday (March 21) during a press briefing at the annual Lunar and Planetary Science Conference in The Woodlands, Texas. [Photos of Pluto and Its Moons]

"It may be telling us that Pluto's surface in the past had running liquids," Stern said.

Seasons change on Earth because the planet's axis is tilted at about 23 degrees. When the northern hemisphere points toward the sun, summer comes to the region; the southern hemisphere, by contrast, is locked in winter at such times.

The 23-degree angle also accentuates latitudinal differences. The parts of Earth within 23 degrees of the poles sit inside the Arctic (or Antarctic) Circle, while the tropics near the equator occasionally experience the sun directly overhead.

But the situation is even more extreme on Pluto, which is tilted nearly 120 degrees compared to the plane of its orbit. The dwarf planet therefore goes through massive changes as it orbits the sun once every 248 years.

"Over the course of its 248-year cycle, there are times when the sun is directly overhead for southern latitudes," said New Horizons science team co-principal investigator Richard Binzel, of the Massachusetts Institute of Technology.

Pluto has arctic circles, as Earth does. But on the dwarf planet, these regions endure stretches of darkness lasting years rather than months. And Pluto's polar zones are far more extensive than Earth's, researchers said. [Sharpest Pluto Surface View Released by New Horizons Team (Video)]

"If Earth was tilted by the same amount as Pluto, those of us here in Houston would find ourselves in the Arctic Zone," Binzel said.

Some parts of Pluto are alternately in its arctic circle and tropics, while others remain permanently tropical. Areas on the dwarf planet dominated by dark material — including the region informally dubbed Cthulhu Regio by the team — correlate nicely with the perennially tropical region, Binzel said. This suggests that there may be a seasonal explanation for why Cthulhu Regio has less volatile material — such as water ice and methane — than other parts of Pluto do.

According to Stern, Pluto's changing orientation affects the amount of solar energy that reaches the surface, which in turn affects atmospheric pressure. Today, Pluto's atmosphere has a pressure 1/100,000th of that found at sea level on Earth, but in the past, the dwarf planet's air pressure may have been as much as 10,000 times higher than it is now.

"This implies dramatic changes in the circulation," Stern said.

In extreme places, that pressure can be anywhere from four to 40 times as high as the air pressure found on Mars today. Such high pressures could allow liquid nitrogen to exist at times on the dwarf planet, which would explain some intriguing features spotted by New Horizons.

One such feature, which lies north of Pluto's famous heart-shaped Tombaugh Regio, looks like a small, frozen pond. Had New Horizon's flyby taken place a few million years ago, the spacecraft might have seen this pond in liquid form, Stern said (though that liquid would have been nitrogen, not water).

"It really changes our view of this little planet," Stern said.

Currently, Pluto is in an intermediate phase as far as climate goes, researchers said. The most recent extreme would have dawned about 800,000 years ago. The dwarf planet's cycles over the last few million years could have helped shape the movement of material away from the equator.

"This is just the beginning of understanding how these long-term cycles drive what happens on Pluto," Binzel said. [New Horizons' Pluto Flyby: Complete Coverage]

New Horizons has also returned a vast amount of information about Pluto's five moons. While the largest, Charon, was discovered in 1978, two of the smaller moons were found just before the spacecraft's January 2006 launch, and the other two while it was already on its way toward the distant system.

During its flyby, New Horizons measured the dimensions of the four tiny moons — Nix, Hydra, Kerberos and Styx — for the first time. Now, thanks to observations by the probe, scientists have a good idea of how old the satellites are, which helps them better understand how the moons formed.

Rocks and debris occasionally crash into one another in the solar system today, but in the past collisions were far more common. By counting and analyzing craters, scientists can determine the age of the surfaces of planets and moons. The smooth plains in the southern hemisphere of Charon, informally known as Vulcan Planum, were an ideal place to study the craters and estimate the age of that moon. The smaller Nix and Hydra were less revealing, with Nix showing only 11 craters and Hydra just three.

"There's not a ton here, but these are pretty small surfaces, so the densities are pretty high," said New Horizons team member Kelsi Singer, also of SwRI.

Crater counts revealed that Charon and Nix are likely at least 4 billion years old. The counts for Hydra suggested a younger age, but Singer said the satellite's small crater count was "still consistent with an old age" for the moons. The solar system is only about 4.5 billion years old, suggesting that Pluto and its moonsformed fairly early in its history.

This new information dovetails with other characteristics suggesting that Pluto's moons were created when a giant planetesimal crashed into the dwarf planet long ago. All five satellites follow circular orbits in the same plane and have similar brightnesses. Measurements of the angular momentum of the system further support the hypothesis.

But this doesn't mean that researchers completely understand the Pluto system. One of the first things New Horizons scientists noticed about the moons was their oddly rapid spin rate. For example, Stern described Hydra as "a tumbling football," rotating on its axis 100 times for every orbit it made around Pluto and Charon.

Last fall, some researchers proposed that the fast spins could come from a recent formation of the moons, since their orbits should have slowed over time. But the ancient ages implied by the crater counts suggest otherwise. Singer suggested that more recent collisions, such as those that formed the craters, could continue to keep the tiny moons moving.

"They certainly can be old, but could have been knocked around at some point," she said of the moons.

New Horizons set several records when it explored Pluto, but one of them made waves — radio waves. Radio waves have been used previously to characterize near-Earth asteroids and planetary surfaces, but the most distant object they had probed was Saturn.

Just after New Horizons flew by Pluto, scientists took advantage of the opportunity to break that record, sending radio waves three times farther than the ringed planet. The Goldstone telescopein California — part of NASA's Deep Space Network — beamed an 80-kilowatt radio signal from its 112-foot (34 meters) antenna toward Pluto. Rather than having the waves cross the solar system twice, however, they were angled to bounce from the dwarf planet to New Horizons.

"It was a huge concentrated effort by the people of the Deep Space Network to get that 80 kilowatts online," said New Horizons deputy project scientist Cathy Olkin, also of SwRI.

Ivan Linscott, an astronomer at Stanford University who worked with the team, described radio waves as taking "fingerprints of the surface." As these waves bounce off their target, measurements of them reveal the texture and features of the outer layers.

Unlike most of New Horizons' observations, the radio signals weren't planned before launch. Olkin said that the team began working on this investigation several years ago, but that it took some time for Goldstone to get the massive dish online. Previous radio-wave observations required only 20 kilowatts of energy, so the Pluto study necessitated a significant increase.

The team hopes to break this record a few years from now. If NASA approves and funds a proposed extended mission, New Horizons will fly by a small object called 2014 MU69 on Jan. 1, 2019, at which point team members hope to repeat the experiment, this time at about 1 billion miles (1.6 billion kilometers) beyond Pluto.

Several studies relating to the announcements were published last week in the journal Science.