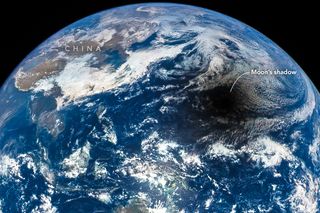 The images, which have been combined into a gorgeous total solar eclipse video, were taken by the Deep Space Climate Observatory satellite (DSCOVR), which sits at a gravitationally stable point in space 930,000 miles (1.5 million kilometers) closer to the sun than Earth is.

DSCOVR, a joint mission between NASA and the U.S. National Oceanic and Atmospheric Administration (NOAA), was designed to provide an early space-weather warning system for the planet. [See photos of the 2016 total solar eclipse]

The spacecraft monitors the stream of charged particles flowing outward from the sun called the solar wind, and watches out for eruptions of solar plasma known as coronal mass ejections (CMEs), which can disrupt power grids, radio communications and GPS navigation if they hit Earth. According to DSCOVR project scientist Adam Szabo, the satellite's position upstream of Earth gives the planet 30 minutes' warning of approaching CMEs.

But DSCOVR's vantage point also allows it to capture amazing photos of the Earth-moon system using its Earth Polychromatic Imaging Camera (EPIC) — including this week's total solar eclipse, which was visible on the ground only from a narrow swath of the Pacific Ocean region, including parts of Sumatra, Borneo, Sulawesi and other islands.

Other DSCOVR images have made a big splash as well. For example, the satellite also famously snapped a shot of the moon "photobombing" Earth last July — a memorable view the DSCOVR team scrambled to capture just weeks after the satellite reached its final position in deep space.

DSCOVR launched atop a SpaceX Falcon 9 rocket in February 2015 and got to its spot, called the Sun-Earth Lagrange Point 1, in early June. The plan then called for extensive checkouts of the spacecraft and its science gear, as is the norm for space missions.

But then the moon-photobombing opportunity came along on July 16.

"It was somewhat of a surprise," said Szabo, who's based at NASA's Goddard Space Flight Center in Greenbelt, Maryland. "We really had to oogie-boogie to get the high-color pictures."

Those pictures were not perfect, because the calibration of EPIC had not been completed yet.

"We didn't want pink clouds," Szabo said. "The decision was, 'don't make things look obviously faulty, but do it as fast as possible.'"

EPIC consists of 10 different filters, only three of which capture light in visible wavelengths (red, green and blue). There's a 22-second delay between when EPIC snaps an image with each of those three filters, said the camera's instrument lead investigator, Jay Herman, also of NASA Goddard; this means a single full-color image can be constructed only once every minute.

Normally, this wouldn't be a problem; from a million miles away, the Earth's movement and rotation are so slight they're not even noticeable in that time frame. But when the moon traveled in front of Earth on July 16, the difference was obvious.

In the photobomb image, there is a band of green on the right side of the moon, as well as a fainter blue band on the left. The difference in distance was enough that the moon had noticeably moved between those 22-second windows.

"We had interesting conversations with headquarters," Szabo said. "Is it better to release images early with artifacts, or is it better service to wait a couple of months and get better images?"

Ultimately, NASA Headquarters decided it would be best to get those early images out and finish calibration as scheduled over the next few months. The decision was made in part because of the DSCOVR mission's high-profile status, which was the result of a tumultuous history.

DSCOVR's journey began in 1998 as Triana, an Earth-observation satellite proposed by then-Vice President Al Gore. NASA shelved the project and only revitalized it in 2011 to replace the older Advanced Composition Explorer satellite. DSCOVR took over ACE's space-weather functions, while EPIC's 10 filters photograph cloud cover and vegetation, aiding studies of climate and global change.

Because of DSCOVR's tortuous past, NASA's discussions about how to publicize the new satellite's work were more involved than usual. The first publicly released DSCOVR photograph was revealed via President Barack Obama's Twitter account.

Daily images of Earth are available at DSCOVR's website, and are now created automatically rather than manually, as the first few images were. And there's no need to scramble anymore, according to Szabo.

"We have a much more mature process to publicly distribute the images," he said.