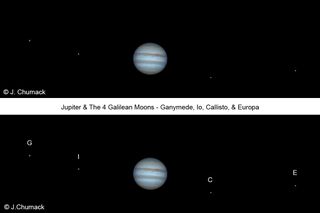 The planet Jupiter sits amidst its moons in this astrophotographer image.

Veteran night sky photographer John Chumack took this image on March 8. "Seeing is believing ... so I went down to lower power to get Jupiter and the nicely placed Galilean moons," Chumack wrote in an email to Space.com referencing his imaging equipment.

Jupiter is shining bright in the nighttime sky now, and should be a brilliant target throughout the northern spring and summer, according

With a total of 67 known moons — including four large moons known as the Galilean satellites — Jupiter almost qualifies as a solar system unto itself.  In January 1610, Italian astronomer Galileo Galilei discovered four of Jupiter's moons — now called Io, Europa, Ganymede, and Callisto. Galileo’s discovery was pivotal point in the history of astronomy as his observation revealed that not all celestial bodies revolved around the Earth. Until that time, Earth was thought to be the center of the universe.

Editor's note: If you have an amazing skywatching photo you'd like to share it with Space.com and our news partners for a possible story or image gallery, send images and comments in to managing editor Tariq Malik at spacephotos@space.com.