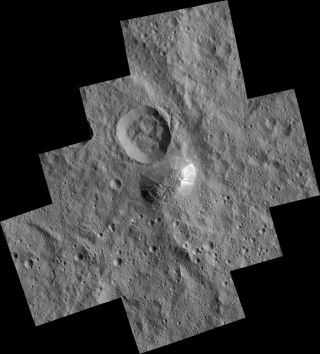 The first spacecraft ever to visit a dwarf planet has now been circling its target for a full Earth year.

NASA's Dawn probe arrived at Ceres — the largest object in the main asteroid belt between Mars and Jupiter — on March 6, 2015, and has been mapping the dwarf planet in detail ever since.

"Ceres has defied our expectations and surprised us in many ways, thanks to a year's worth of data from Dawn," Dawn deputy principal investigator Carol Raymond, of NASA's Jet Propulsion Laboratory in Pasadena, California, said in a statement. "We are hard at work on the mysteries the spacecraft has presented to us." [See photos from NASA's Dawn mission]

Chief among those mysteries are Ceres' intriguing bright spots, and a 3-mile-high (5 kilometers) mountain known as Ahuna Mons.

Ceres' bright patches lie at the bottom of craters — most famously, a 56-mile-wide (90 km) hole in the ground called Occator. For a while, mission scientists debated whether these reflective spots are composed of water ice or salts; the current thinking leans heavily toward salts, in particular hydrated magnesium sulfates. (Here on Earth, magnesium sulfate is sold as Epsom salt, a home remedy for sore feet and other ailments.)

Ahuna Mons remains more mysterious. The dome-shaped, steep-sided mountain, which is taller than the United States' Mount Rainier and Mount Whitney, features bright streaks on some of its slopes, but Dawn scientists aren't sure what they're made of.

And nobody yet knows just how Ahuna Mons came to be.

"No one expected a mountain on Ceres, especially one like Ahuna Mons," Dawn principal investigator Chris Russell, of the University of California, Los Angeles, said in the same statement. "We still do not have a satisfactory model to explain how it formed."

The $466 million Dawn mission launched in September 2007, tasked with orbiting and studying the two largest objects in the asteroid belt — the 330-mile-wide (530 km) protoplanet Vesta, and Ceres, which is about 590 miles (950 km) across. The main goal is to gain insights into the solar system's early days by  observing these two leftovers from the planet-formation period — hence the mission's name.

Dawn arrived at Vesta in July 2011 and departed for Ceres in September 2012. When Dawn reached the latter destination, it became the first probe ever to orbit two separate objects beyond the Earth-moon system.

Dawn has eyed Ceres from four successively closer-in orbits over the past year. The spacecraft is now in its final orbit, which lies just 240 miles (380 km) from Ceres' surface. Dawn will continue studying the dwarf planet from this perch for the remainder of its mission, which is scheduled to end on June 30, 2016.