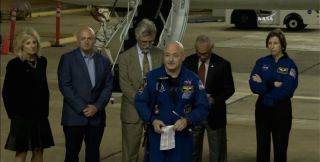 NASA astronaut Scott Kelly's return to American soil after nearly a year in space was a party of sorts, and the Second Lady of the United States took care of the refreshments.

Kelly and cosmonaut Mikhail Kornienko wrapped up their unprecedented 340-day mission aboard the International Space Station with a touchdown on the steppes of Kazakhstan late Tuesday night (March 1). About 27 hours later, a NASA jet brought Kelly home to Houston, where Jill Biden, the wife of Vice President Joe Biden, was waiting with beer and apple pie for the astronaut.

"That's what he said he wanted, so that's what I brought him," Biden said during a brief ceremony at Houston's Ellington Field, which began when the plane rolled into its hangar Thursday (March 3) at about 2:20 a.m. EST (0720 GMT; 1:20 a.m. local Houston time). [A Year in Space: Epic Space Station: The Latest News]

"The beer is from the president, actually, from the garden, and the apple pie is just from all Americans," she added, though the food and drink remained out of sight during the ceremony. "So, we hold you in our hearts. Welcome home."

Biden wasn't the only bigwig on hand for Kelly's homecoming. She was joined by John Holdren, Assistant to the President for Science and Technology; NASA Administrator Charles Bolden; former astronaut Ellen Ochoa, the director of NASA's Johnson Space Center (JSC) in Houston; and a number of other current and former astronauts, including Mark Kelly, Scott's identical twin brother.

The main goal of the nearly yearlong mission is to help pave the way for crewed journeys to Mars, by allowing researchers to better understand how long-duration spaceflight affects people physiologically and psychologically. (Mark Kelly is a participant in the mission, even though he stayed on the ground; scientists are studying Mark to help identify any genetic changes in Scott induced by his orbital experience.)

"We are going to go to Mars — there's no doubt about that," Holdren said to Scott Kelly. "We are committed to it. We're going to get it done, and you really have established the latest milestone on that very challenging pathway. So, thank you for that."

Scott Kelly said a few words at the ceremony as well, thanking the people who have worked with him on the one-year mission and, like Holdren, affirming the need for NASA, the United States and the world to keep pushing out into space. He also made it clear that he was very happy to be reunited with his family and friends.

"I missed everyone very much," Kelly said.

The entire event took a mere 20 minutes or so. Kelly was then ushered to a white SUV, which took him to JSC for a medical evaluation — and then, perhaps, home, where he could drink a beer and enjoy a nice slice of apple pie.