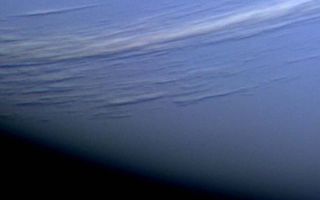 In 1989, Voyager 2 approached Neptune and captured the first images of the soft, elongated cirrus-type clouds in the planet's atmosphere.
(Image: © Voyager 2, NASA)

Voyager 2 made its closest approach to Neptune in 1989, and two hours before the robot spacecraft gathered the first images of the soft, elongated cirrus-type clouds over the planet. Neptune's atmosphere consists mainly of hydrogen and helium with small amounts of methane, which account for its bluish color. [See more photos of Neptune.]