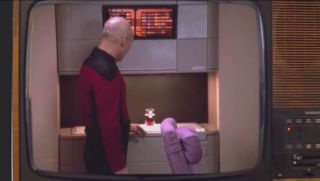 In "Star Trek," space travelers can easily "replicate" any food they desire. But for real space travel, scientists are working on technologies that will help keep astronauts well-fed.
(Image: © NASA/"Star Trek" Replicator Challenge)

If future space travelers wish to make a cup of Earl Grey tea like Captain Jean-Luc Picard from "Star Trek: The Next Generation" — or chocolate treats, as the show's character Deanna Troi asked for — they'll need technology and ideas seeded by scientists today.

NASA, "Star Trek" and the American Society for Mechanical Engineers Foundation (ASME) want students to help figure out the future of food production in space, so the organizations have created the "Star Trek" Replicator Challenge. ASME is asking students to create 3D-printed designs for hardware that will be needed to prepare nutritious meals in space. Examples could include hardware to grow plants, or to prepare or dispose of food.

"Sustainability will be a critical aspect of long-duration space missions and will require off-planet manufacturing technologies to create all of the items our future astronauts need," said Niki Werkheiser, NASA's in-space manufacturing manager, in a statement from NASA.

According to a video announcing the challenge, the winning designs will fly in space in 2050. The challenge was recently launched at the Intrepid Sea, Air & Space Museum in New York City and runs through May 1. Several prizes are available for winners of the Replicator Challenge, such as a visit to the Intrepid Museum (home to the space shuttle Enterprise) with an astronaut, a 3D printer for the school of the winning inventor, or a "Star Trek" prize pack.

While "Star Trek" is celebrating its 50th anniversary this year, food has yet to actually be "replicated" in space or on Earth the way it has been depicted in the many incarnations of Trek shows and films. In the Trek universe, characters can simply tell a machine what they desire, and it appears almost instantly.

Real-world astronauts can use a 3D printer onboard the International Space Station to create tools and other hardware that might move them toward "replicating" food for future space travelers. The first 3D printer was sent to the station in 2014 and has successfully printed 21 items so far.

NASA pointed out that successful food production will be essential for the agency's plans to colonize locations out in space, specifically Mars.

More information on the "Star Trek" Replicator Challenge is available at http://www.FutureEngineers.org/StarTrek.