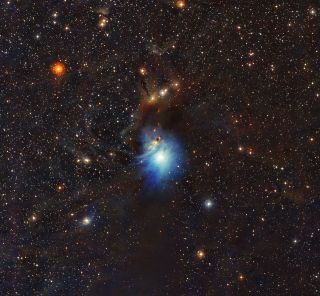 In this new image, a newly formed star (HD 97300) lights up the surrounding gas and dust, creating a reflection nebula — much like car headlights light up surrounding fog.
(Image: © ESO)

A dazzling young star glows like a blue light bulb in a gorgeous new photo captured by a telescope in Chile.

The star, known as HD 97300, lights up a nearby cloud of dust and gas particles, creating a "reflection nebula." The reflection nebula featured in the new image is called IC 2631, scientists said. You can zoom in on the star and nebula in this neat video.

"IC 2631 is the brightest nebula in the Chamaeleon Complex, a large region of gas and dust clouds that harbors numerous newborn and still-forming stars," representatives of the European Southern Observatory (ESO) wrote in an image description. "The complex lies about 500 light-years away in the southern constellation of Chamaeleon."

The image, which was taken by the MPG/ESO 7.2-foot (2.2 meters) telescope at La Silla Observatory in Chile, showcases a region that is abundant in star-forming material. Some of this material is apparent in dark nebulae, which are gas and dust clouds that are so dense that starlight can't pass through them. In the image, dark nebulae are visible above and below IC 2631, ESO representatives said.

HD 97300 looks impressively bright now, but its glory days won't last forever. HD 97300 is in the "T Tauri" phase — the youngest stage for small stars. T Tauri stars have not yet begun to fuse hydrogen into helium in their cores, as "main sequence" stars such as the sun do; rather, they generate heat from contraction, ESO representatives said.

HD 97300 will be significantly smaller and dimmer when it reaches stellar adulthood and joins the main sequence.

"These fledging stars already have surface temperatures similar to their main sequence phase," ESO representatives added in the image description. "Accordingly, because T Tauri-phase objects are essentially jumbo versions of their later selves, they look brighter in their oversized youth than in maturity."

While IC 2631 looks bright in reflected light, there are some emission nebulae that actually generate their own light. Hotter new stars, for example, create ultraviolet radiation that ionizes (removes energized electrons from) gas nearby.

"These emission nebulae indicate the presence of hotter and more powerful stars, which, in their maturity, can be observed across thousands of light-years," ESO representatives wrote. "HD 97300 is not so powerful."