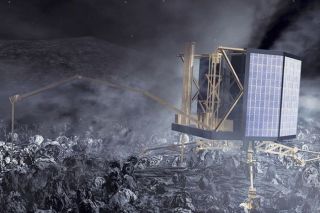 Philae managed to 'sniff' organic molecules on the comet during its short mission, but it soon lost contact with mission control in 2014.
(Image: © Artist's impression: ESA/AOES MediaLab)

The European Space Agency is giving up on trying to contact the lost Philae comet lander, which had an unexpectedly rough touchdown after its release 16 months ago from the orbiting Rosetta mothership.

Rather than harpooning itself onto the surface of comet 67P/Churyumov-Gerasimenko, Philae bounced several times before coming to a rest against a cliff wall.

The probe ran through an automated three-day series of science experiments and relayed the results back to Earth before its batteries lost power.

Ground control teams tried to re-establish contact with the lander in hopes of a follow-on mission. Philae was designed to analyze materials on the comets surface and subsurface so they could be compared with data collected by Rosetta, which remains in orbit around 67P today.

Scientists were excited when they picked up Philae's signal last summer, but control teams were never able to maintain communications long enough to put Philae back to work, most likely due to a failure of the lander's transmitter, ESA said.

If Philae had touched down on its original landing site, it would have had much more sunlight available to recharge its batteries. But it's also likely Philae would have overheated as the comet approach the sun last March.

"Unfortunately, the probability of Philae re-establishing contact with our team is almost zero, and we will no longer be sending any commands,"said project manager Stephan Ulamec, with the German Aerospace Center.

"At the moment, we plan to keep the receivers on the orbiter on, as long as there is no power constraint for Rosetta, no reason to switch them off," Ulamec wrote in an email to Discovery News.

"Chances are very low that we will hear again from the lander... but we keep listening," he added.

As far as Philae's contributions to the mission, Ulamec said that only the lander could provide the "ground truth" for the comet's composition. Philae discovered organic molecules on the surface of 67P, and returned high-resolution pictures that allowed scientists to assess the physical properties of the surface materials.

"You cannot do this from orbit," Ulamec said.

Philae's radar instrument was able to measure the internal structure of the comet, which turned out to be highly porous. Even Philae's unplanned hops on the surface of 67P provided valuable scientific insight, such as that the comet lacks a magnetic field.

Philae was not able to complete all of what scientists had hoped, including digging out subsurface samples for a chemical analysis.

Analysis from both Philae's mission and the ongoing Rosetta expedition continue.

Scientists are hoping to get a look at the lander on the comet's surface this summer when Rosetta moves in for another round of close flybys.

"We will ... finally locate Philae and understand its attitude and orientation," Rosetta spacecraft operations manager Sylvain Lodiot said in a press release.

Understanding how and exactly where Philae is positioned will help scientists interpret some of the data relayed by the lander during its 60-hour mission.

Philae eventually will be joined on the comet's surface by Rosetta, a permanent testimony to an unprecedented journey.