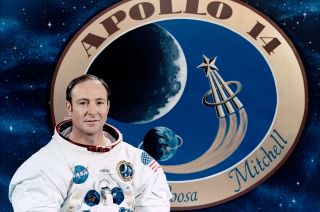 The death of Apollo 14 astronaut Edgar Mitchell, the sixth man to walk on the moon, has drawn tributes from across the space community, as his passing was reported in the news and shared on social media.

Mitchell died Thursday (Feb. 4) — the eve of the 45th anniversary of his and Alan Shepard's lunar landing in 1971 — at age 85 after a short illness.

"On behalf of the entire NASA family, I would like to express my condolences to the family and friends of NASA astronaut Edgar Mitchell,"Charles Bolden, NASA's administrator and a former space shuttle astronaut, said in a statement released Friday (Feb. 5). "As a member of the Apollo 14 crew, Edgar is one of only 12 men to walk on the moon."[Edgar Mitchell: The Sixth Man on the Moon]

In the process, the two astronauts set a record for the longest distance traveled by foot on the moon. In 2011, NASA's Lunar Reconnaissance Orbiter revealed that their boot prints are still in place and are visible from the moon's orbit four decades later.

"Honored to have met Ed Mitchell while [a] 'baby astronaut,'"Clay Anderson, a former space station flight engineer, wrote on Twitter. "We were at NASA's Marshall Space Flight Center for a moon boot print dedication."

"RIP sir and thank you for your courage and service to our nation. Godspeed,"Anderson added on Twitter.

Condolences also came from the current commander of the International Space Station.

"Sad to learn of the passing of Edgar Mitchell, coincidently 45 years after he walked on the moon. A true pioneer,"NASA astronaut Scott Kelly wrote from onboard the orbiting outpost.

In addition to his service to the nation's space program, Mitchell furthered a personal interest in human consciousness, conducting personal ESP experiments on the way back from the moon and founding the Institute of Noetic Sciences.

"I first met Ed when I was at MIT as he was studying there at the same time,"Apollo 11 moonwalker Buzz Aldrin recalled on Facebook. "Ed was certainly involved in advanced mental sensory perceptions, a.k.a. mind reading. Not my bailiwick, but I respected him for his persistence and dedication to studying the unknown."

"I'm sorry to lose another of our Apollo Lunar Pioneers. RIP Ed,"Aldrin wrote.

With Mitchell's passing, only seven of the 12 Apollo astronauts who walked on the moon are still living. Mitchell was preceded in death by his Apollo 14 commander, Alan Shepard, as well as Neil Armstrong (Apollo 11), Charles "Pete"Conrad (Apollo 12) and James Irwin (Apollo 15).

"Walt and I lost a dear friend today,"Dot Cunningham, the wife of Apollo 7 astronaut Walt Cunningham, wrote on Facebook. "[Mitchell's] accomplishments were many and his heart bigger than the moon he landed on."

Mitchell's legacy lives on, in part, in the work he did with the Astronaut Scholarship Foundation, a nonprofit founded by the Mercury astronauts that awards college students excelling in science and engineering degrees.

"When asked about his time in space, he once stated, 'You develop an instant global consciousness, a people orientation, an intense dissatisfaction with the state of the world and a compulsion to do something about it,'"the foundation recounted in a tribute posted online. "He lived his life fulfilling that mission, and in doing so, he made this world a better place."

Mitchell contributed his perspective on his life's experiences in the 2007 documentary "The Wonder of It All,"which told the human side of the story of the men behind the Apollo missions.

"His friendship and support towards us and our film transcended all our expectations,"wrote the filmmakers, including director Jeffrey Roth. "We will be forever grateful for his genuine support over the years."

"The world will remember Edgar as the Lunar Module Pilot of Apollo 14,"Roth, executive producer Stephen Beck and producer Paul Basta wrote, "but we will remember him as our friend who just happened to walk on the moon. Godspeed Edgar, may you continue on your journey now."