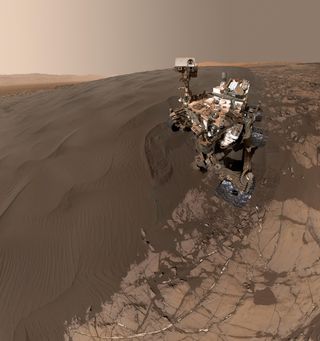 Curiosity Self-Portrait at 'Big Sky' Drilling Site Night Close-up of Martian Sand Grains This Jan. 19, 2016, self-portrait of NASA's Curiosity Mars rover shows the vehicle at "Namib Dune," where the rover's activities included scuffing into the dune with a wheel and scooping samples of sand for laboratory analysis.
(Image: © NASA/JPL-Caltech/MSSS)

NASA's Mars rover Curiosity has snapped a selfie featuring sunshine and lots of sand, but it's no vacation pic.

The car-size Curiosity rover was hard at work investigating Namib Dune — part of a larger complex of shifting dark Martian sand called Bagnold Dunes — when it captured the photo on Jan. 19.

As part of this work — the first up-close examinations of dunes on a world beyond Earth — the six-wheeled robot has scooped up three samples of Namib Dune for analysis by its onboard instruments, grabbing two on Jan. 19, and another one on Jan. 22, NASA officials said.

Processing of the third sample did not go according to plan, however. An actuator in the processing device on Curiosity's 7-foot-long (2.1 meters) robotic arm failed to function properly, leaving part of the sample trapped inside a sort of tunnel, NASA officials said.

"The rover responded properly to this unexpected event," Curiosity deputy project manager Steve Lee, of NASA's Jet Propulsion Laboratory in Pasadena, California, said in a statement. "It stopped moving the actuator and halted further use of the arm and sampling system."

The incident, which will prohibit analysis of the third sample, is under investigation. (The rover's onboard instrument suite will still study the second sample scooped from Namib Dune, NASA officials said.)

The Bagnold Dunes lie on the northwestern flank of Mount Sharp, a 3-mile-high (5 kilometers) mountain at whose base Curiosity arrived in September 2014. The rover is steadily climbing up through Mount Sharp's lower reaches, studying the many rock layers for clues about how and why Mars shifted from a relatively warm and wet world in the ancient past to the cold, dry planet it is today.

The new Curiosity sand-dune selfie is actually a composite of 57 separate images captured by the Mars Hand Lens Imager camera at the end of the rover's arm. The arm was not visible in the photos (or portions of photos) used to construct the selfie, NASA officials said.