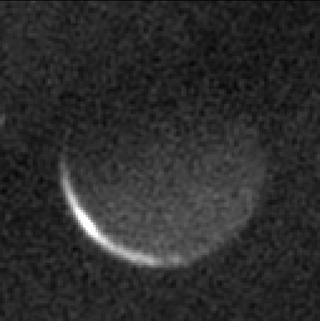 NASA's New Horizons spacecraft captured this image of the night side of Pluto's largest moon, Charon, on July 17, 2015.
(Image: © NASA/JHUAPL/SwRI)

Pluto's largest moon, Charon, is cloaked in darkness, with just a tiny sliver lit up by the distant sun, in a newly released photo.

NASA's New Horizons spacecraft captured the image on July 17, 2015, three days after the probe's historic flyby of Pluto. That close encounter brought New Horizons within just 7,800 miles (12,550 kilometers) of Pluto's surface; the night-side view of Charon, on the other hand, was taken from a distance of 1.9 million miles (3.1 million km), NASA officials said.

"Charon's nighttime landscapes are still faintly visible by light softly reflected off Pluto, just as 'Earthshine' lights up a new moon each month," agency officials wrote in a description of the image, which was released Friday (Jan. 22).

"Scientists on the New Horizons team are using this and similar images to map portions of Charon otherwise not visible during the flyby," the officials added. "This includes Charon's south pole — toward the top of this image — which entered polar night in 1989 and will not see sunlight again until 2107. Charon's polar temperatures drop to near absolute zero during this long winter."

At 753 miles (1,207 km) in diameter, Charon is more than half as wide as Pluto itself. The dwarf planet's other four moons — Nix, Hydra, Kerberos and Styx — are all tiny by comparison. For example, Nix and Hydra measure just 33 miles (54 km) and 27 miles (43 km), respectively, in their longest directions, while Styx and Kerberos are even smaller.

The $720 million New Horizons mission launched a decade ago, in January 2006. The probe is currently zooming toward a potential January 2019 flyby of a small object called 2014 MU69, which lies about 1 billion miles (1.6 billion km) beyond Pluto.

New Horizons will study 2014 MU69 up close, if NASA approves and funds a proposed extended mission. The spacecraft is also still beaming home the data and images it collected during the July 2015 flyby; this relay work should be done by this coming autumn, mission team members have said.