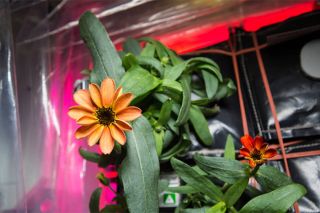 This zinnia bloomed on the International Space Station after mold attacked some of its fellow flowers.
(Image: © Scott Kelly/NASA/Twitter)

As mold threatened zinnia flowers in the space station Veggie experiment, investigators decided to take a bold move: allow an astronaut to take care of the flowers without always calling for help from home first. The result? Flowers are now blooming in space, marking a successful result after several other plants died due to infection.

"We're pleased with the Veggie team for coming out with the procedure, and Scott knocked it out in lickety-split," said Veggie project manager Trent Smith in an interview with Discovery News.

It signals NASA's careful moves towards preparing astronauts for long-term voyages far from home. And the astronaut who volunteered to help was a fitting symbol of this goal: Scott Kelly, who is spending nearly a year on the International Space Station to see how his body and mind reacts to a long period in space.

Kelly was exuberant in pictures tweeted from the International Space Station. "Yes, there are other life forms in space!" he wrote in one message. "First ever flower grown in space makes its debut," he said in another.

NASA decided to change its Veggie-tending procedure in December, after mold was discovered growing on zinnia plants. High humidity is blamed for the situation. The Veggie team already knew of extra water on the plants, but was unable to relay the command to dry them through operations until mold already developed.

Kelly initially took instructions from the team, which included removing the dead plants, wiping down the area and turning up the fan to dry it out. But when Kelly offered to take control of tending the remaining plants himself, Smith's team jumped at the chance. Smith told Discovery News that having Kelly do the work would avoid the "delayed reaction" NASA experienced the first time around.

The Veggie team gave Kelly a one-pager called The Zinnia Care Guide for the On-Orbit Gardener, according to NASA, making sure the information was streamlined enough for a busy astronaut. It proved to be more than enough. The flowers were well recovered by Jan. 12, and Kelly sent his triumphant tweets of blooms from space earlier this week.

PHOTOS: How a NASA Astronaut is Paving the Way to Mars

NASA is working on several ways to help astronauts become more autonomous, whether they rove out to an asteroid or Mars in the future. For example, the agency has experimented with time-delayed exploration at its Aquarius underseas habitat. One large role of the ISS will be to experiment with giving astronauts more and more responsibility for doing and overseeing their own tasks, without Mission Control always hovering nearby.