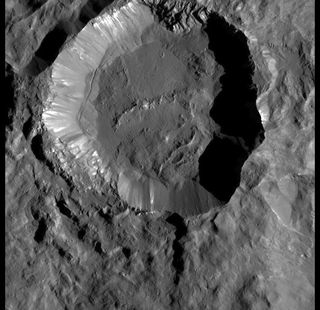 New up-close photos of Ceres show some of the dwarf planet's many craters in sharp and intriguing detail.

The images were captured last month by NASA's Dawn spacecraft from a distance of just 240 miles (385 kilometers) — the final and closest of a series of orbits for the probe, which has been circling Ceres since March 2015.

"Everywhere we look in these new low-altitude observations, we see amazing landforms that speak to the unique character of this most amazing world," Dawn principal investigator Christopher Russell, of UCLA, said in a statement Tuesday (Jan. 12). [What Are Ceres' Bright Spots? (Video)]

One of the newly released images reveals bright material on the rim of Kupalo Crater, a young hole in the ground that's about 16 miles (26 kilometers) wide. Scientists plan to investigate this bright stuff further, to see how it's related to Ceres' other intriguing bright spots (such as the ones at the bottom of Ceres' 56-mile-wide, or 90 km, Occator Crater), which appear to be salt deposits.

"This crater and its recently formed deposits will be a prime target of study for the team as Dawn continues to explore Ceres in its final mapping phase," Dawn science team member Paul Schenk, of the Lunar and Planetary Institute in Houston, said in the same statement.

Another photo shows fractures on the floor of Ceres' 78-mile-wide (126 km) Dantu Crater, which are similar to cracks seen within a big young crater on the moon called Tycho.

"This cracking may have resulted from the cooling of impact melt, or when the crater floor was uplifted after the crater formed," NASA officials wrote in the statement.

Another image depicts a 20-mile-wide (32 km) crater west of Dantu, which features numerous ridges and steep slopes known as scarps. The scarps probably formed when the crater partly collapsed during or shortly after the impact that created it, NASA officials said.

The $466 million Dawn mission launched in September 2007, on a mission to study Vesta and Ceres, the two largest objects in the main asteroid belt between Mars and Jupiter. Dawn orbited the 330-mile-wide (530 km) Vesta from July 2011 through September 2012, when the probe departed for the 590-mile-wide (950 km) Ceres.

When Dawn arrived at Ceres in March 2015, it became the first spacecraft ever to orbit a dwarf planet, as well as the first to circle two different bodies beyond the Earth-moon system.