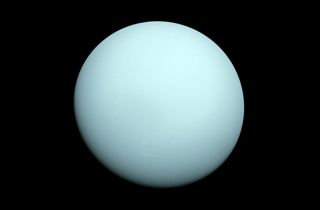 Amateur astronomers the world over enjoy regular views of Venus, Mars, Jupiter, Saturn and even elusive Mercury. The outer solar system planets Uranus and Neptune, however, are often overlooked.

Certainly they are fainter, as they are further away, so there is much less detail to be seen. That said, they are worthy targets and should be seen as a challenge and not avoided.

My personal interest in Uranus, which can be seen to the west in evening skies through December and January, started when I decided to have a bash at imaging it. To my surprise, it was easy enough to find and with a CCD plugged into the back of my telescope, easily revealed the planetary disk and four of its moons.

Uranus was discovered when 18th Century British astronomer William Herschel was engaged in the systematic study of stars in the night sky to identify double stars. For two years he studied the night sky almost every night and on March 13, 1781, he noticed a star in Taurus that seemed to appear a little different to the others.

The planet Herschel discovered increased the size of the known solar system to about 5.6 billion kilometers. Future observations revealed a world just over 50 thousand kilometers in diameter and gaseous in nature. Due to the presence of ices in its atmosphere such as ammonia and methane, Uranus is referred to as an "ice giant," differentiating itself from Jupiter and Saturn. The presence of methane leads to the absorption of red light and the reflection of blue light giving Uranus is stunning blue color.

Throughout the remainder of January, Uranus can be found low in the west before sunset in the constellation Pisces (see above chart). It never shines fainter than 6th magnitude, which is the generally accepted limit of naked eye visibility from a dark site, but unless you are very keen sighted, binoculars are the best way to hunt it down. While it can be seen as a blue star through binoculars, higher magnification is needed to detect the planetary disk and, from my experience, a magnification of about 50 is needed. Visually you will only be able to see Uranus as a tiny blue disk but those of you with large telescopes, around 280mm can try CCD imaging with a black and white camera and a Wratten 25 filter.

ANALYSIS: Getting to Grips With Your New Telescope

If you want to pick out some of the planet's twenty seven moons then the best chance you have visually is to hunt down Oberon and Titania. They are both around magnitude 14 so are right on the limit of a 300mm telescope but lie at a decent distance from the planet to make them easier to detect. The greater sensitivity of a CCD camera will greatly aid capturing images of the elusive moons.

For those observers with smaller instruments then the greatest interest can be gained by observing Uranus over the period of a few weeks to see its slow motion against the background of glittering stars.