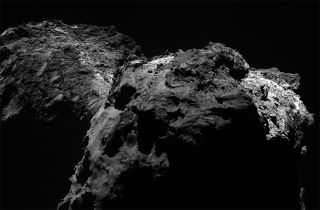 This image shows a view of comet 67P/Churyumov-Gerasimenko from the orbiting Rosetta spacecraft taken on Dec. 15, 2015 from a vantage point 57 miles away.
(Image: © ESA/Rosetta/MPS for OSIRIS Team MPS/UPD/LAM/IAA/SSO/INTA/UPM/DASP/IDA)

With time running out to find the lost comet lander Philae, ground controllers attempted another communications pass on Sunday in hopes of getting the probe to shift into a better position.

The lander dispatched by Europe's Rosetta spacecraft touched down on comet 67P/Churyumov-Gerasimenko on Nov. 12, 2014, but it bounced several times and ended up wedged by a cliff wall. Philae completed a short, pre-programmed science run, but hopes to return it to work so far have been fruitless.

The last contact with Philae was on July 9. The comet, which made its closest approach to the sun in August, will be more than 186 million miles away by the end of the month. Temperatures on the surface of 67P will plunge to minus 60 degrees Fahrenheit (-50 degrees Celsius), too cold for Philae's equipment to operate, the German Aerospace Center said on Friday.

"Time is running out," Philae landing manager Stephan Ulamec said in an update posted on the agency's website.

Control teams planned a last-ditch effort on Sunday to contact Philae and command it to move its flywheel, a device that was used to stabilized the spacecraft during its descent to the comet's surface. The hope is that the spinning of the wheel will shift Philae, shaking dust from its solar panels and better aligning it with the sun.

The odds aren't great. Engineers don't even know if Philae still has a working receiver and transmitter. The probe also could be covered in dust.

"There is a small chance," said operations manager Cinzia Fantinati.  "We want to leave no stone unturned."

Meanwhile, the Rosetta mothership, which has been orbiting the comet since August 2014, is expected to remain operational until September 2016.