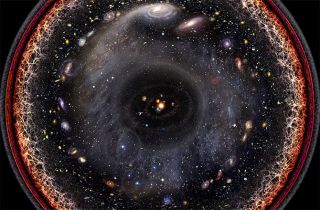 An enterprising artist has taken on one of the biggest concepts known to man: the universe.

Pablo Carlos Budassi is drawing eyes across the Internet this week for a dazzling logarithmic visualization of the observable universe that he created and uploaded to Wikimedia Commons in 2013.

VIDEO: Is There a Universe That Mirrors Our Own?

In an interview, Budassi told Tech Insider that he was inspired to craft the visualization while drawing hexaflexagons.

ANALYSIS: Our Universe: It's the 'Simplest' Thing We Know

"Then when I was drawing hexaflexagons for my sons birthday souvenirs I started drawing central views of the cosmos and the solar system," he told the website. "That day the idea of a logarithmic view came and in the next days I was able to it with Photoshop using images from NASA and some textures created by my own."

This blog originally appeared on DSCOVRD and was provided by Discovery News.