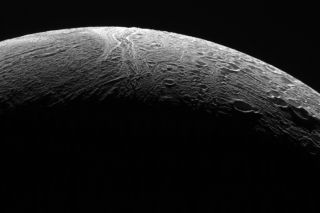 The northern territory of Saturn's icy moon Enceladus is seen in glorious detail by NASA's Cassini spacecraft during its final close flyby of the moon on Dec. 19, 2015.
(Image: © NASA/JPL-Caltech/Space Science Institute)

Cassini made its final close flyby of the moon on Dec. 19, when it passed within 3,106 miles (4,999 kilometers) of the surface. "This final Enceladus flyby elicits feelings of both sadness and triumph," Cassini project manager Earl Maize at NASA's Jet Propulsion Laboratory (JPL) in California said in a statement.

"While we're sad to have the close flybys behind us, we've placed the capstone on an incredible decade of investigating one of the most intriguing bodies in the solar system." [See more amazing photos of Enceladus by Cassini]

After Cassini arrived at Saturn in 2004, it didn't take long for the spacecraft to reveal that Enceladus boasted surprising geologic activity. Cassini revealed that, far from being a stagnant chunk of ice and rock, the moon contained a series of geysers across its southern pole. The discovery caused changes to the original mission flight plan to maximize flybys of the moon.

In addition to studying the characteristics of the geysers, Cassini also revealed that the icy moon contains a global ocean layer and geologic activity beneath its icy crust. These discoveries make Enceladus one of the best potential sites in the solar system where life had the potential to evolve beyond Earth. Hopefully, Cassini won't be the last of the moon's visitors; NASA is considering a mission to Enceladus in the next decade.

Cassini will wrap up its mission in 2017 by plunging into Saturn's atmosphere. Until then, it will continue to study Enceladus from farther away, though its closest passes will be no closer than four times farther than its final encounter.

"We bid a poignant goodbye to our close views of this amazing icy world," said Linda Spilker, Cassini's project scientist, who is also at JPL.

"Cassini has made so many breathtaking discoveries about Enceladus, yet so much more remains to be done to answer that pivotal question, 'Does this tiny ocean world harbor life?'"