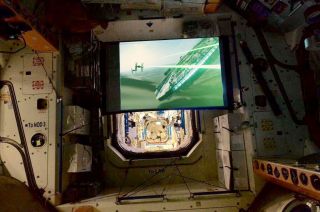 Coming to an off-the-Earth film screen: the astronauts aboard the International Space Station will watch Star Wars.
(Image: © NASA/Disney (composite by collectSPACE.com))

As it turns out, the allure of "the Force" can out-pull even the force of gravity.

The cultural impact of Star Wars, including episode 7, "The Force Awakens," premiering in theaters on Friday (Dec. 18), has escaped the Earth and extended all the way into outer space.

"I am told that 'Star Wars' will be waiting for us up there," British astronaut Tim Peake wrote on Twitter on the eve of his launch to the International Space Station on Tuesday (Dec. 15). "What a place to watch it!" [In a Cinema Far, Far Away: Hollywood's 'Star Wars' Films]

The space station's six-person crew, which includes the newly-arrived trio of Peake, cosmonaut Yuri Malenchenko and NASA's Tim Kopra, as well as commander Scott Kelly of NASA and cosmonauts Mikhail Kornienko and Sergei Volkov, will be able to watch "The Force Awakens" thanks to Mission Control and a recently-installed theater system on board the orbiting outpost.

"We are very fortunate on board the space station to have great communications these days," Peake explained. "Our crew support guys on the ground, who do a fantastic job, upload an occasional movie or television program for us to watch."

That screening, whenever it should occur (Kelly has noted in the past that "movie night" on the space station is on Saturday), will not be the first time the "Star Wars" universe has crossed over to factual space. In fact, it won't even be the first for this space station crew.

Before leaving Earth for orbit, Kelly, Kornienko and Volkov — together with NASA's Kjell Lindgren, cosmonaut Oleg Kononenko and Kimiya Yui of JAXA (the Japan Aerospace Exploration Agency), who landed back on Earth last Friday (Dec. 11) — dressed as Jedi for a NASA posterpromoting their mission.

The Expedition 45 poster even snuck in an appearance of the Death Star among a number of real-life space vehicles, including a Russian Soyuz rocket and Europe's ATV, the latter with its X-Wing-like solar arrays.

Lindgren, Kononenko and Yui, who are now back on Earth (just in time to catch the opening of "The Force Awakens"), also added a bit of "Star Wars" flare to their spacecraft. The three launched on Russia's Soyuz TMA-17M in July with a plush R2-D2 as their talisman and "zero-g indicator." When the three reached orbit, the droid began to float, signaling they were in space.

The Jedi crew poster and R2-D2 tag were just the latest examples of "Star Wars" reaching space. One of the earliest instances dates back more than three decades to just one year after the release of "Star Wars: Episode VI - Return of the Jedi" (1983).

Four years later, the same track was radioed into space as Darth Vader himself awoke the crew of STS-27 aboard the space shuttle Atlantis.

Williams' score was used to wake at least five more shuttle crews, sometimes alternating to Darth Vader's theme and the Cantina Band from Episode 3, "A New Hope." One of those calls was requested by astronaut Scott Parazynski's son, Luke.

"I am your father. Use the Force, Luke," Parazynski replied from orbit in 2007.

As it happened, Parazynski was also sharing space with a real piece of "Star Wars" history aboard that same mission. Flying on space shuttle Discovery was the prop lightsaber used by Mark Hamill as Luke Skywalker in "Return of the Jedi." NASA flew the lightsaber on the STS-120 mission to honor the 30th anniversary of the franchise.