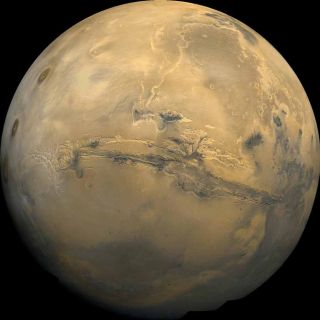 The word from Russia is that the country wants to send monkeys to the Red Planet by 2017. But waving the red flag on such a plan are the People for the Ethical Treatment of Animals (PETA).

A few months ago, it was reported that researchers from the Russian Academy of Science are busy training four macaque monkeys to make a long-distance trek to the Red Planet.

Researcher Inessa Kozlovskaya is the leader of the team responsible for teaching the monkeys at the Institute of Biomedical Problems of the Russian Academy of Sciences. Educating the animals includes joystick training and tapping into the cognitive thinking and learning skills of the animals. [Animals in Space: A Photo Menagerie]

While the sojourn to Mars of the monkeys would take six-months, it wasn't immediately clear whether there's any provision to return the animals back to Earth.

"PETA has written to Igor Komarov, the head of the Russian Federal Space Agency, calling on him to cancel the misguided mission and instead use high-tech 21st-century space exploration methods," said Harriet Barclay, European Outreach Liaison of the PETA Foundation.

Barclay told Inside Outer Space that PETA was shocked to hear that Russia is planning to send four macaque monkeys to Mars in 2017.

"There's no reason to repeat the dark days of early space exploration, in which dogs and primates died in horrific ways, all alone in a tiny shuttle hurtling through space," Barclay said. "Laika, the husky-mix dog who was sent into space on [the former Soviet Union's] Sputnik 2 in 1957, died of overheating and panic within hours of take-off. Others animals sent into space have died of suffocation, frozen to death or burned up on impact," she adds.

Robotics rather than animals

Barclay explains that primates are sensitive, intelligent animals and are likely to experience extreme distress during the years of tests and training in the run-up to the monkeys-to-Mars mission. Because the animals would be "unable to understand what is happening to them, they would be terrified if they're eventually sent on a fatal mission that they never signed up for," Barclay says.

In the PETA letter to Komarov, the organization explains that primates are no longer sent into space by American or European space agencies and that China's space agency is focusing on high-tech robotics rather than animals.

"We will also be organizing eye-catching demonstrations at Russian embassies across Europe and urging our supporters all over the globe to join us in sending the message that animals are not astronauts," Barclay concludes.

Leonard David has been reporting on the space industry for more than five decades. He is former director of research for the National Commission on Space and is co-author of Buzz Aldrin's 2013 book "Mission to Mars – My Vision for Space Exploration" published by National Geographic with a new updated paperback version released in May 2015. Follow us @Spacedotcom, Facebook or Google+. Published on Space.com.