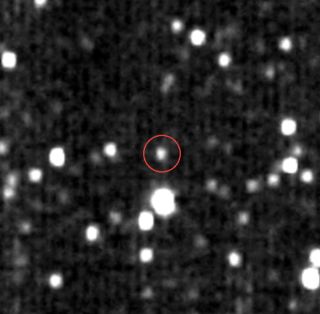 NASA's New Horizons spacecraft has captured the closest images of a small object in the Kuiper Belt, the ring of icy bodies beyond Neptune's orbit, mission team members say.

New Horizons, which performed history's first flyby of Pluto this past July, took four photos of a 90-mile-wide (150 kilometers) Kuiper Belt object called 1994 JR1 on Nov. 2, from a distance of 170 million miles (280 million km). You can watch a 1994 JR1 as seen by New Horizons here.

"This sets a record, by a factor of at least 15, for the closest-ever picture of a small body in the Kuiper Belt, the solar system's 'third zone' beyond the inner, rocky planets and outer, icy gas giants," New Horizons' handlers said in a statement.

1994 JR1 was about 3.3 billion miles (5.3 billion km) from the sun when New Horizons took the photos with its long-range camera, mission team members added.

New Horizons is on course to study a different Kuiper Belt object (KBO), the roughly 30-mile-wide (48 km) 2014 MU69, during a close flyby in January 2019, if NASA approves and funds a potential extended mission for the probe. Such observations could shed further light on the solar system's early days, because small KBOs are likely much more primitive and pristine than Pluto, which shows signs of recent geological activity, mission officials have said.

The photos of 1994 JR1 show what kind of work New Horizons could do during the next few years as it zooms toward this potential close encounter, team members added.

"Mission scientists plan to use images like these to study many more ancient Kuiper Belt objects from New Horizons if an extended mission is approved," mission officials said in the same statement.

The $720 million New Horizons mission launched in January 2006, tasked with returning the first-ever good looks at Pluto. The dwarf planet had remained largely mysterious since its 1930 discovery because it's relatively small and lies so far from the sun (about 40 times more distant than Earth, on average).

On July 14, New Horizons cruised within 7,800 miles (12,550 km) of Pluto's surface, capturing images of a breathtakingly diverse landscape complete with towering water-ice mountains and glaciers of frozen nitrogen. The spacecraft will be beaming home data and photos from the flyby through next August or thereabouts, mission team members have said.