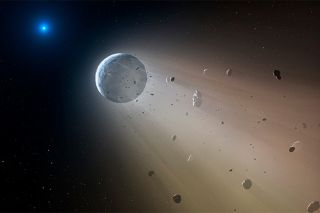 Artist’s impression of WD 1145+017 (white dwarf star, at left) and a planet shedding nearby (center). This is one planetary find by the K2 mission.
(Image: © Mark A. Garlick/markgarlick.com)

The Kepler planet-hunting spacecraft is "working really well" despite changing its techniques due to mechanical problems, the lead author of a new study says.

Under a new mission called "K2", Kepler has found 234 planetary candidates in the first year of searching. That is beyond the expectations of the community, since Kepler cannot point as precisely as it used to due to a reaction wheel (stabilization) problem.

"The main reason we wrote this paper is that there are way too many planets for us to look at by ourselves," Harvard University's Andrew Vanderburg wrote Discovery News in an e-mail. "We need help from other astronomers to learn all we can about these exciting new planets. So we hope that our paper serves as an invitation to others to start taking a look."

Until 2013, Kepler stayed pointed at a spot in the Cygnus constellation, looking for planets passing in front of its stars. That mission appeared to end for good, however, when two of the four reaction wheels on Kepler failed, likely due to age.

The spacecraft needs a minimum of three reaction wheels to stabilize its position in space. NASA, however, proposed an alternate mission called K2. Simply speaking, Kepler now uses the pressure of the sun to stay stable, but it has to swing its view from time to time to make sure the sun stays out of its viewfinder.

"It turns out that the new method is working almost exactly as well for bright stars as Kepler worked before its malfunction," Vanderburg wrote. "This is not something anyone expected back in 2013 after the mechanical failure. Even the most optimistic estimates of K2's performance were not that hopeful."

While Kepler isn't finding as many planets today, Vanderburg points out the spacecraft also isn’t looking at as many stars. But the stars it is looking at under the new mission tend to be brighter (easier to spot) than the old mission. Bright stars are easier to perform follow-up observations, so this gives an advantage for confirming if the planets spotted are indeed real.

Among those follow-ups that Vanderburg looked at is the WASP-47 system, which has two gas giant planets orbiting very close to their parent star. The unprecedented "hot Jupiter" find could help astronomers figure out how big planets can live so close to their parent stars, because that’s definitely not the case in our own solar system. Another example is WD 1145+017, a white dwarf that may have a planet falling apart nearby due to the star’s gravity.

"There are other stars with planets in here that we're observing as well, and hope to study and learn more about in the future," Vanderburg added. "Some particularly exciting research we would like to do is learn about the masses and radii of these planets. This allows us to know what the planets are made of — are they rocky like the Earth, or are they gaseous like Neptune and Jupiter? For some particularly special planets, we might be able to learn about their atmospheres, to find out what gases are present."

The new study is accepted in the Astrophysical Journal Supplement Series and is available inpreprint version on Arxiv.

The new study is accepted in the Astrophysical Journal Supplement Series and is available in preprint version on Arxiv.