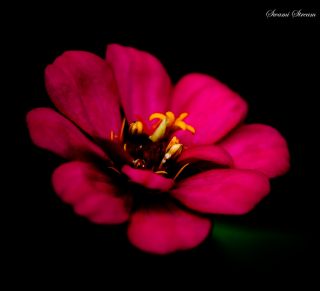 NASA astronauts aboard the International Space Station have planted zinnia seeds to learn about how flowering plants bloom in space.
(Image: © Swaminathan via Flickr)

The International Space Station is about to get a little homier, thanks to a flower garden that should bloom in early 2016.

On Monday, Nov. 16, NASA astronaut Kjell Lindgren activated an experiment to test whether flowering plants can grow in space. Dubbed the "Veggie" plant-growth system, it's the same technology that grew red romaine lettuce on the space station earlier this year.

While the flowers won't add fresh food to the astronauts' otherwise-dehydrated diet, growing zinnias in orbit will help scientists learn how being in space affects a flowering plant's growth, and suggest what other plants could be grown in space, NASA officials said in a statement.

"Growing the zinnia plants will help advance our knowledge of how plants flower in the Veggie growth system, and will enable fruiting plants like tomatoes to be grown and eaten in space using Veggie as the in-orbit garden," Trent Smith, Veggie program manager at NASA's Kennedy Space Center in Florida, said in the statement.Research into growing plants in space could help the astronauts who someday head deeper into the solar system reliably produce food.

"Growing a flowering crop is more challenging than growing a vegetative crop such as lettuce," Gioia Massa, Kennedy Space Center payload scientist for Veggie, said in the same statement. "Lighting and other environmental parameters are more critical."

The Veggie system uses red, blue and green LED lights to simulate sunlight, similar to the vertical farming trend here on Earth. Lindgren activated the water and nutrient system to Veggie on Nov. 16 and will monitor the plant growth over the next 60 days.

Researchers hope the flowers' growth cycle, which is double the cycle of the lettuce grown previously, will provide good data about long-duration seed stow and germination as well as whether pollen would be a problem in the space station, officials said in the statement. Plus, researchers will examine whether having live plants on board affects crew morale.

Once the zinnia project is complete, NASA scientists plan to grow tomato plants on the space station, in 2017, the scientists said.