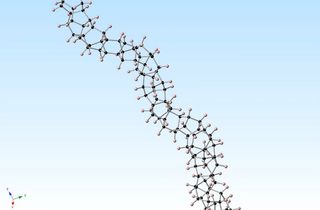 Diamonds in the sky might recall a popular Beatles song, but researcher from Penn State University think that's exactly where these diamonds belong.

They discovered a way to produce ultra-thin diamond nanothreads that could be ideal for lifting a space elevator from Earth to the Moon.

The team, led by chemistry professor John Badding, applied alternating cycles of pressure to isolated, liquid-state benzene molecules and were amazed to find that rings of carbon atoms assembled into neat and orderly chains.

While they were expecting the benzene molecules to react in a disorganized way, they instead created a neat thread 20,000 times smaller than a strand of human hair but perhaps the strongest material ever made.

The Penn State University researchers immediately had a hunch that these diamond nanothreads, which are remarkably light and strong at the same time — could prove to be an ideal material for a space elevator, a long cable anchored on Earth and reaching into space to attach to a satellite in orbit.

Just recently, a team from the Queensland University of Technology in Australia modeled the diamond nanothreads using large-scale molecular dynamics simulations and concluded that the material is far more versatile than previously thought and has great promise for aerospace properties. The simulation was published in early November.

This intriguing research is laying the foundations for what could someday bring the long awaited space elevator, which was first proposed as a concept in 1895.