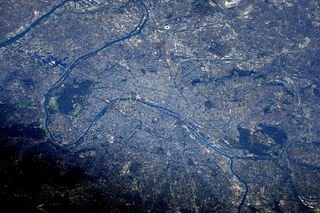 NASA astronaut Scott Kelly posted this space station view of Paris on Twitter after the Nov. 13 terrorist attacks on the city.
(Image: © Scott Kelly via Twittter)

The crew of the International Space Station and flight controllers worldwide held a moment of silence this week for the victims of the Nov. 13 Paris terrorist attacks, and NASA astronaut Scott Kelly shared some remarks in a new video.

The space station personnel joined a stunned and grieving world in the wake of Friday's attacks in Paris, which killed 129 people and injured 352. The space station's six-man crew took part in the tribute on Monday (Nov. 16), NASA officials said. A NASA video chronicling the moment shows American astronaut Kjell Lindgren floating in weightlessness as he paused his science work to observe the moment of silence.

"We were obviously shocked and saddened by what occurred there in Paris, and we stand with the people around the world that fight […] against terrorism and for all of our common good," station commander Scott Kelly says in video.

Kelly also honored the victims of the attack the day after by tweeting a beautiful view of Paris taken from the space station, originally shared Nov. 1.

"Our thoughts are with you," he wrote, uniting his crew's thoughts from off the world with those from all around the planet.

Six crewmembers are currently aboard the International Space Station. In addition to Kelly and Lindgren, the station crew includes Japanese astronaut Kimiya Yui and Russian cosmonauts Mikhail Kornienko, Oleg Kononenko and Sergey Volkov. Kelly and Kornienko are flying a one-year mission to the space station, while their crewmates are flying a shorter, six-month flight.