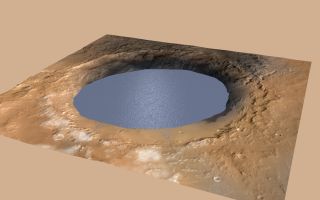 A simulated image of a lake filling Mars' Gale Crater in the ancient past. New research suggests that lakes could form on present-day Mars and, if deep enough, could last at least a year, though they would quickly form an icy crust.
(Image: © NASA/JPL-Caltech/ESA/DLR/FU Berlin/MSSS)

Despite its frigid temperatures, Mars might be able to host lakes of water on its surface today, a new study suggests.

Although extremely small amounts of water would quickly evaporate in Mars' low-pressure atmosphere, water from sources such as aquifers could last long enough to pool, with larger pools remaining liquid for at least a year, researchers said.

"Nobody's doubting that liquid water was on Marsat some point," Jules Goldspiel, of the Planetary Science Institute in Arizona, told Space.com. "The question I was interested in is, given today's conditions, which are hostile to liquid water, could you [still] get it." [Photos: The Search for Water on Mars]

He created a simulation to determine if liquid water could puddle and form pools to remain liquid today.

"You could get it for a little while, potentially," said Goldspiel, who presented his results Nov. 12 at the 47th annual meeting of the American Astronomical Society's Division for Planetary Sciences in National Harbor, Maryland.

For example, surface temperatures on present-day Mars can dip below minus 80 degrees Fahrenheit (minus 60 degrees Celsius). And the planet has low surface pressures, so small amounts of liquid water quickly turn to gas.

"If you put water on the surface, either it evaporates or [it] freezes," Goldspiel said.

Recent research suggested that if a significant amount of water flowed from a source such as an aquifer, it could stay liquid on the surface for a while, forming the puzzling features known as recurring slope lineae (RSL) that appear on some Red Planet slopes during warm months. RSL could form if a landslide or some other event exposed a source of water at the surface. Eventually, the water would begin to freeze and replug the source, cutting off the flow, researchers have said.

Goldspiel wondered what might happen if the water managed to collect in a pool. He simulated the flow of both hot and cold water running down a slope to collect in a basin with a 320-foot (100 meters) radius. While the surface layer would evaporate off, a layer of ice would eventually cover such a pool.

For shallow ponds just 10 feet (3 m) or so deep, Goldspiel found that the water would freezealmost immediately. However, when the water flowed long enough to form lakes about 65 feet (20 m) deep, it would remain liquid for at least a year, he found.

Furthermore, cold water — at temperatures around 35 F (2 C) or so — would form an icy crust that would act as a thermal blanket, Goldspiel determined. In the Martian summer, any ice throttling the source could melt, allowing more water to flow down to the pool. The new water would freeze on top of the existing ice, but would provide some warmth that could pass through and melt the layer in contact with liquid water, helping to thin the ice layer even while building it.

However, if the water were hot — around 170 F (77 C) — it could not only build the small lake but also help keep the layer of water beneath the surface liquid. Beds of ice have already been found beneath the Martian surface, and other scientists have proposed that liquid water could lie under the planet's red dirt. Pockets of subsurface water might even be able to support life, protected against the harmful radiation that scours the planet, many astrobiologists say.

A one-time spurt from a hot-water source would eventually freeze over. So far, Goldspiel has run his simulation for only one Mars year, but he plans to run it longer to see how long such a pool would last before freezing over. He estimates it would take three to four years to freeze solid.

However, if that water were continuously replenished, the pool could last even longer, with incoming hot water helping to melt the already-thinning summer ice. Hot water might come from features like a low-pressure hydrothermal vent— or, as Goldspiel called it, a "hydrothermal seep."

Goldspiel noted that, although 170 F sounds hot, "on Earth, you see temperatures like that all the time, or like Yellowstone water coming out hot." [Ancient Mars Could Have Supported Life, NASA Finds (Video)]

"It's not an unreasonable temperature for a hydrothermal system," he said.

The idea that water could flow on Mars today has been explored since the 1980s, but as far as Goldspiel knows, no one has explored the idea of how long it could remain liquid at various depths under today's conditions.

Although no signs of the ice packs that would hint of these lakes are visible, that doesn't mean they couldn't form in the future under present conditions. But for these pools to build even temporarily, the water would have to flow quickly and the pools would have to be deep, Goldspiel said.