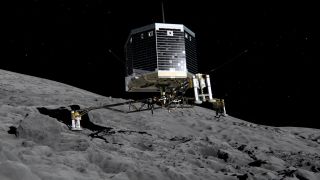 An amazing new video shows the wild ride a European spacecraft took to the surface of a comet last year.

The new video, which the European Space Agency (ESA) released last week, reconstructs history's first-ever touchdown on a comet, which was performed by the Rosetta mission's Philae lander on Nov. 12, 2014.

Things didn't go entirely according to plan that day: Philae's anchoring harpoons failed to fire, and the lander bounced twice, at one point drifting in space near Comet 67P/Churyumov-Gerasimenko for about 2 hours. [Photos: Europe's Rosetta Comet Mission in Pictures]

The new video animation is based on data collected by Philae's instruments, as well as those onboard the Rosetta mothership, which has been orbiting Comet 67P since August 2014, ESA officials said.

Philae ended up settling in a shadier spot than planned, and its primary batteries ran out on Nov. 15, 2014, after the lander had accomplished 80 percent of its science mission. Philae has made only intermittent contact with the Rosetta orbiter in the past year, touching base between June 13 and July 9.

Rosetta had to move farther from the comet — out of range of Philae — in the months after that contact was made due to increased activity on 67P's surface as it got closer and closer to the sun. Now that the comet is quieting down again (closest solar approach occurred in August), mission controllers are hoping to zoom in closer and hail Philae once more. They estimate that, by the end of January, the surface of Comet 67P will be too cold for Philae to function.

Philae didn't stick its landing because of problems with the three systems intended to secure it — ice screws, harpoons and a small thruster. The prime landing site ended up being too hard for the ice screws, ESA officials said.

The harpoons could theoretically have dug in, but they did not fire when Philae hit the surface. Nor was a thruster available to counteract Philae's recoil, as planned; it would not arm the night before, perhaps because of a seal problem or a sensor failure.

As for the harpoons: "It seems that the problem was either with the four 'bridge wires' taking current to ignite the explosive that triggers the harpoons, or the explosive itself, which may have degraded over time," Philae lander manager Stephan Ulamec, of the DLR German Aerospace Center, said in a statement.

If controllers can re-establish communications with Philae, ESA may try to fire the harpoons again because they include sensors that can probe the temperature below 67P's surface, agency officials said.

Rosetta itself is expected to continue its mission until September 2016, roughly nine months beyond its original funded date. Controllers may make the orbiter slowly land on the comet, taking pictures and data up until the moment of impact.