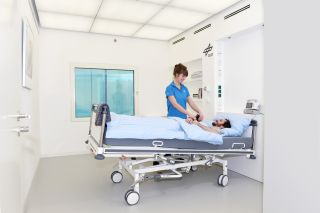 A volunteer in a bedrest study lies in bed with his body angled 6° below the level plane at the head-end. Image released Aug. 28, 2015.
(Image: © DLR)

Even the most active, take-on-the world people have days when they just don't want to get out of bed. But that probably won't be the case for 12 men who agreed to spend 60 days and nights lying in a bed for science.

On Sept. 9, the first of those brave volunteers took to his bed for a study that will hopefully lead to better understanding of the ways spaceflight affects the human body — and how to stop the muscle and bone loss that comes with extended time spent in orbit.

Staying in bed for two months may sound like an easy job, but that's far from the case. The study requires volunteers to lie in a bed with their feet inclined at a 6-degree angle — meaning their heads will be lower than the rest of their body throughout all 60 days of the experiment. Twelve groups of scientists will constantly monitor each man, leading to little or no privacy. And the participants will have to keep at least one shoulder touching the mattress at all times. [‪The Human Body in Space: 6 Weird Facts]

That means no bathroom breaks, no showers and no sitting up to eat or drink. A study like this requires strength, both mentally and physically, researchers said.

"Organizing month-long scientific studies is a huge task, and, aside from coordinating the researchers from all over Europe, choosing the test subjects is extremely important as the success of the study depends on their commitment," Jennifer Ngo-Anh, head of the European Space Agency's (ESA) Human Research Office, said in a statement.

In order to truly compare the muscle and bone loss bedridden volunteers experience to that of astronauts, the men involved in this study have to be just as physically fit as anyone launched into space.

Astronauts lose bone and muscle due to underuse at about the same rate as bedridden people on Earth, giving scientists stationed on the ground a unique opportunity to test ways to change the effects of microgravity on the body, ESA officials said.

The participants in this study are going through about 90 experiments, designed by 12 scientific groups, to test insulin resistance, the cardiovascular system, how the brain copes with the upside-down rest and the degree to which artificial gravity can mitigate some of the negative health effects of spaceflight.

The scientists are charting changes in volunteers' bodies, starting two weeks before and ending two weeks after the study.

Thanks to state-of-the-art equipment at the German Aerospace Center's "envihab" facility in Cologne, Germany, researchers can adjust everything from daylight to temperature and humidity over the course of the 60-day lie-in.

One experiment, titled "Reactive Jumps," will use new exercise equipment that makes it possible for people to "jump" while lying down, and will also work for astronauts floating around in space. The equipment uses low-pressure cylinders to mimic gravity. It targets bone, muscle and coordination, ESA officials said.