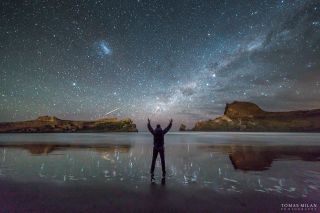 A three-hour drive provided an amazing shot of a dazzling meteor for one dedicated astrophotographer.

Photographer Thomas Milan took this image of a meteor among the Milky Way stars from Castlepoint, one of his favorite dark sky locations in New Zealand. The photo was captured during the annual Perseid meteor shower in August.

"This photo shows the Milky Way seemingly emanating from the gap next to Castlerock (on the right), one of the two Magellanic Clouds (Nubeculae Magellani), and an almost golden-looking meteor shooting towards the Earth. I was very pleased to have caught one on camera," he wrote to Space.com. [See more amazing Perseid meteor photos for 2015]

The Perseid meteor shower occurs every August and is created by bits of Comet Swift-Tuttle and often create the most amazing meteor shower of the year. They enter Earth's atmosphere (and are then called meteors) at roughly 133,200 mph (60 kilometers per second) relative to the planet. Perseid meteoroids are anywhere from 60 to 100 miles apart.