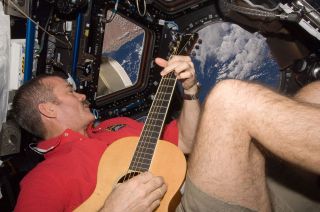 Chris Hadfield plays guitar while floating inside the Cupola on the International Space Station in 2012. Now, songs that he recorded using that guitar are being released on a new album.
(Image: © NASA)

In the first single off of Chris Hadfield's new music album, the first album to be primarily recorded in space, the Canadian astronaut croons, "Can't stand on my own two feet, I just float away, I took a ride in a hot, hot seat, now I'm ready to play, far away."

And play he does.

Hadfield, who is maybe best known (at least musically) for his zero-g rendition of David Bowie's "Space Oddity," fills "Space Sessions: Songs From a Tin Can" with 11 original tracks that he wrote, sang and played guitar for, all while serving as a crew member aboard and commander of the International Space Station in 2013. [Watch: How to Play the Guitar in Space]

"Bit by bit, squeezed into all of the work that was going on up there, I recorded those songs," said Hadfield as part of a behind-the-music interview posted on his website. "They were changed by the place. A couple of them I wrote from scratch, inspired by being up there."

"By the end, I had successfully commanded a spaceship and done all the work, but also came home with a dozen or 15 songs recorded like music has never been recorded before," he said.

The result, "Space Sessions," will be released on Oct. 9 by Warner Music Canada. The album became available for pre-orderAug. 7, with Hadfield autographing the first 500 CDs sold and bundles offering patches and t-shirts based on the album's cover art.

In "Feet Up," the album's first single, Hadfield sings about being weightless, "hanging on by [his] fingertips." [Video: Chris Hadfield Records 1st Song in Space]

As it turns out, hanging on was just one of the challenges of recording songs in orbit.

"Trying to play guitar without gravity, it doesn't seem hard, right? So what? The guitar is just floating, hovering — it should be easier than on Earth, you'd think, because you don't have to hold the guitar up," Hadfield remarked. "Well, if suddenly you're weightless...the guitar is not going to sit on your knee, so you need to find some other way to hold [it] still. Otherwise, every movement of your left hand and the guitar takes off!"

Adding to that was the need to find a quiet place aboard the station and some means of recording what came out of the guitar, a Canadian Larrivée Parlor that was already aboard the orbiting outpost when Hadfield arrived.

"The only place on the whole spaceship quiet enough — it's like recording in the back of a bus or somewhere where it's always this big rumble of all the machinery spinning — the place that was quietest I found was my little tiny sleep pod," Hadfield recalled. "And fortunately, the parlor guitar is small enough [to fit inside]."

"You could not even put it side to side, but I could wedge my body in there and get one knee up, sort of, and the other foot sort of wedged down, because there is foot rail or a handrail down there. So I could get my body sort of stable to hold the guitar against myself and then get the microphone floating in front of me and, with headphones on listening to the click track [from an iPad], do a guitar track and then listen to that and do a vocal track and lay it down that way."

Even then, Hadfield had to hope for enough time alone to record a full song. He was, after all, commanding a crew of five other astronauts and cosmonauts aboard an orbital laboratory that demanded almost full-time attention.

"I hung a sign on the outside of my [sleep pod] door that said, 'Recording in Session,' so no one would come and knock," he recounted. "But often part way through a song, Houston would call and say, 'Hey! We need you [to do some work],' or an alarm would go off or something."

"Amazingly enough by 2,400 times around the world, I had a dozen or 15 songs of varying quality," Hadfield reflected. "It is not an easy place to record, but it sure is a fun one."

Hadfield not only found that his guitar playing style had to change to accommodate the space environment, but that his voice was altered, too. [Chris Hadfield's Video Guide to Life in Space]

"You end up with a new normal," he stated. "It is a space voice, not an Earth voice."

In the larger sense, Hadfield's new tone reflected the new voice of spaceflight itself.

"We've been living on this spaceship for 15 years. We're not in the newness phase, we are not in the plant-the-flag-and-say-we're-here-phase — we're actually in the we-left-Earth phase," Hadfield said. "Whoever we were back there has now moved to here and the reality of this place, the weightlessness, the views, the tasking, the separation... that culture is becoming separate and distinct from culture on Earth."

"It's a precursor to what it's going to be like when we start living on the moon. The 'lunians,' or whatever we're going to call them, or the martians, when we first start living on Mars, they won't be earthlings. Their culture, their art, their poetry, their music, it will all evolve in that place," he said. "And part of this album was just thinking of that."

Listen to Chris Hadfield’s first single, "Feet Up," off his album "Space Sessions: Songs From a Tin Can" at collectSPACE.com.