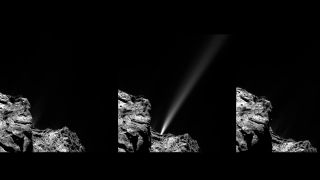 These three images of comet Churyumov-Gerasimenko were acquired by the OSIRIS camera on board the Rosetta spacecraft on July 29, 2015. In the first image the outburst is not yet visible. Eighteen minutes later, the camera captures an enormous gas outflow. The third image displays only the weak remains of the jet. The images were acquired from a distance of 115 miles (186 kilometers) from the comet.
(Image: © ESA/Rosetta/MPS)

The European Space Agency's Rosetta orbiter has been keeping a close eye on the Comet 67P/Churyumov-Gerasimenko – snapping amazing photos as the celestial wanderer hurls dust and gas into space as it approaches its closest point to the sun this week.

The Rosetta spacecraft has been orbiting Comet 67P for just over a year, and on Aug. 13 the comet will reach perihelion - its closest approach to the sun before heading back out to the edge of the solar system.

According to experts with the German Aerospace Center (Deutsches Zentrum für Luft- und Raumfahrt; DLR), roughly 220 lbs. (100 kilograms) of the Comet 67P's mass are disappearing into space per second. As the comet approaches the sun, its frozen ice has been heating up and turned into gas, which has dragged along some dust with it as it spills out into space. [See more amazing comet photos by Rosetta]

On July 29, the OSIRIS camera on the Rosetta spacecraft recorded the most powerful outburst yet on Comet 67P, showing a bright jet erupting from the comet's surface from a distance of roughly 115 miles (186 kilometers).

"This is the brightest jet we've seen so far," said Carsten Güttler, an OSIRIS science team member at the Max Planck Institute for Solar System Research in Göttingen, Germany, in a statement. "Usually, the jets are quite faint compared to the nucleus and we need to stretch the contrast of the images to make them visible – but this one is brighter than the nucleus"

"The activity of the comet will likely increase slightly in the days after perihelion," said Ekkehard Kührt, a researcher at the DLR. "We are now excited to see how it will evolve in the coming days and weeks."

"The activity will depend mainly on where the active areas are with respect to the comet's seasonal cycle," Kührt added in a DLR statement. "With the mission, we are for the first time accompanying a comet and monitoring its development for such a long period of time."

Rosetta's comet lander Philae is still along for the ride on Comet 67P since its landing on the comet's surface last November. However, Rosetta's current trajectory is not favorable for establishing communications with the landed probe.

"The orbiter, which is a kind of relay station to Philae for us, is flying over the southern hemisphere, which is particularly active," explained DLR engineer Koen Geurts, Technical Project Manager for Philae.

The last contact between Philae and the team at the DLR Lander Control Center in Cologne took place on July 9.

To make sure Philae could still carry out its job on the surface, even without communication with the ground team, the DLR engineers tested some commands on their ground model in Cologne.

These commands were then sent "blind" — in other words, without a response, to Philae.

In the event that the lander receives these commands and executes them, it will initiate a sequence in which various instruments will be operated and the data stored until contact is resumed.

Rosetta was launched in 2004 and arrived at Comet 67P/Churyumov-Gerasimenko in August 2014. It is the first mission in history to rendezvous with a comet, escort the comet as it orbits the sun and deploy a lander to its surface.

Leonard David has been reporting on the space industry for more than five decades. He is former director of research for the National Commission on Space and is co-author of Buzz Aldrin's 2013 book "Mission to Mars – My Vision for Space Exploration," published by National Geographic, with a new updated paperback version to be released in May.Follow us @Spacedotcom, Facebook and Google+. Story published on Space.com.