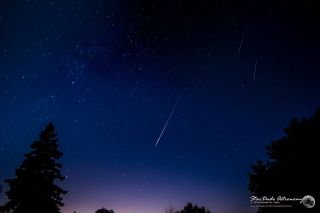 Luckily for those watching the skies, there will be a new moon, allowing for maximum darkness just when the Perseid meteor shower will be is at its best. The meteor shower's peak occurs during the overnight hours of Wednesday (Aug. 12) and Thursday (Aug. 13). No fancy equipment is required; just a lawn chair and your naked eyes will be enough to see the "shooting stars."

The Perseids are visible from all over the Northern Hemisphere. To have the best chance of seeing a meteor, pick a dark area (as far from bright city lights as possible) and face northeast. The meteors were appear to radiate out from the constellation Perseus, hence their name: Perseids. [Amazing Perseid Meteor Shower Photos of 2014]

While showers are hard to forecast, astronomers with the Royal Astronomical Society believe there will be at least one meteor every few minutes. A NASA advisory for the 2015 Perseid meteor shower predicted up to 100 meteors per hour.

According to the Royal Astronomical Society, French astronomer Jeremie Vaubaillon further predicted there could be a brief outburst at about 2:40 p.m. EDT (6:40 p.m. UTC). It won't be visible in North America, however, as the daytime skies will be too bright at that time.

Meteor showers occur when the Earth plows into small particles in space left behind by a comet or asteroid. In this case, the Perseids come from the tail of Comet Swift-Tuttle (whose last visit to Earth was in 1992). They are named after the constellation Perseus, the direction from where they appear to radiate.

If it's cloudy those nights, there still is a chance to catch a few Perseids. While there will be fewer shooting stars to see, the Perseids extend from about July 17 to Aug. 24. Meteor showers occur several times during the year, with another prominent display happening in November when the Leonid shower occurs.

Editor's note: If you catch a neat photo of the meteor shower and want to share it for a possible story or gallery, send images and comments in to managing editor Tariq Malik at spacephotos@space.com.