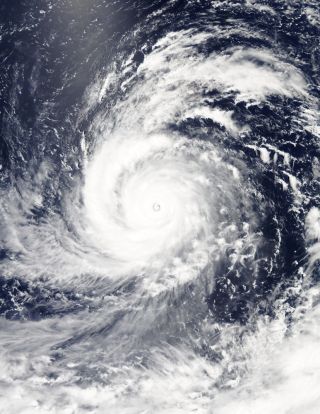 Prying eyes from space have helped to observe and characterize the most powerful storm of the year to date.

NASA's RapidScat instrument aboard the International Space Station and the agency's free-flying Aqua satellite peered down to observe Super Typhoon Soudelor, which registers as a Class Five typhoon — the highest classification on the Saffir-Simpson Wind Scale.

The storm, which has smashed its way across the western Pacific Ocean this week, boasts wind gusts of up to 220 mph (354 km/h).

Soudelor is expected to weaken before it makes landfall in southeastern China on Saturday (Aug. 8), NASA officials said.

No deaths have been attributed to the massive typhoon to date.

Incidentally, the terms "typhoon" and "hurricane" refer to the same phenomenon. Powerful storms are called "hurricanes" when they occur in the Atlantic and northeast Pacific regions, "typhoons" in the northwest Pacific and "cyclones" in the south Pacific and Indian Ocean regions.