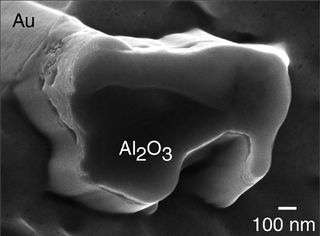 Using a scanning electron microscope, researchers were able to take a close look at this tiny piece of the Tieschitz meteorite. Called a presolar grain, the minuscule space rock is just one micron in diameter and helped astronomers determine how solids coalesce from dying asymptotic giant branch (AGB) stars.
(Image: © CIW/NRL/L. Nittler.)

A pair of miniscule meteorite grains has helped astronomers settle a long-running debate on the origins of space dust belched out by dying stars.

Chemical analysis of the grains, which formed before the solar system and our Sun, confirmed they contained two forms of a metal oxide that astronomers had only seen hints of in observations of stars reaching the end of their life cycle.

"It's always been believed that this [material] was the first thing that forms from these stars," said Larry Nittler, a co-author of the study and a staff scientist at the Carnegie Institution of Washington.

But before now, researchers weren't sure both forms of the metal, one crystalline and the other not, were belched out in the early phases of a certain type of dying star called an asymptotic giant branch (AGB) star. Such stars are the most significant source of interstellar dust in the Milky Way, researchers said. Understanding how it is expelled by AGB stars, and in what form, is crucial to determining how chemical elements cycle from stars to interstellar space and, eventually, coalesce into new stars, planets and the building blocks for people.

"This is the start of that entire process," Nittler told SPACE.com.

AGB stars were once like the Sun, but have reached a period in their lifecycle when they are blowing out massive amounts of dust and material in preparation for their eventual slip down to white dwarf status, Nittler said.

The research will appear in the Sept. 3 issue of the journal Science and is the result of collaboration between scientists at the Naval Research Laboratory and the Carnegie Institution of Washington, both in Washington D.C.

The grains themselves were plucked from the Tieschitz meteorite, a space rock that fell to Earth in 1878 in Moravia, located in what is now the Czech Republic.

Neither of the grains is larger than a single micron (one-millionth of a meter or about one-fiftieth the width of a human hair), although they are composed of the same material - aluminum oxide. One grain contains a crystalline form of the metal while the other is made of a non-crystalline, amorphous version.

"They're much smaller than a grain of sand, but they can tell you about these vast processes," said Nittler of the presolar grains.

They can be set apart from other early solar system matter because their isotopic oxygen signatures are unlike those found in oxygen samples anywhere else in the solar system, though researchers sifted through hundreds of sample before finding the two presolar grains.

Nittler said the next step is to analyze a much larger number of aluminum oxide grains to see how they compare to these first two.