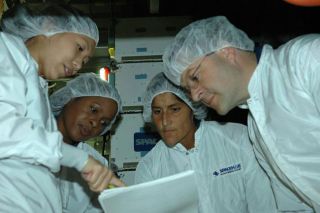 The schedule slips--which are expected to be formally approved in November--wouldgive the agency adequate time to deliver modified external tanks to Kennedy Space Center and complete required pre-launch work on shuttle orbiters.

Station crew rotation missions are scheduled for launch on Russian Soyuzspacecraft next spring and next fall. Robotic Russian space freighters also areto be launched on quarterly supply runs to the outpost.

"There are a lot of vehicles on the highway, if you will, and we have to makesure everybody is kind of following all the traffic signals to make sure thatit's all integrated properly," said Kyle Herring, a spokesman for NASA's Johnson Space Center in Houston.

The assembly of the outpost's metallic backbone would continue on shuttlemissions scheduled for launch March 16 and June 28. Then, an American modulethat will serve as a gateway to international partner science labs would belaunched Sept. 7.

The missions had been slated for launches on Feb. 22, June 11 and Aug. 9. Thechanges were requested after an all-day meeting of shuttle and station programmanagers.

Herring said NASA still intends to launch the European Space Agency's Columbus laband the first section of the JapaneseKibo science complex before the end of 2007.

NASA managers did not discuss launch date changes for those flights. RecentNASA schedules reflected a Sept. 22 launch date for the European lab and a Nov.29 target for launch of the Japanese mission.

A spring 2008 "placeholder" remains in the schedule for a potential mission toservice the Hubble Space Telescope, Herring said. A decision on whether toproceed with a final flight to the flagship observatory is expected at the endof the month.

NASA needs to launch at least 14 more shuttle missions to finish the half-builtstation before a Sept. 30, 2010, deadline set by President Bush.

Also under consideration: Two additional flights to haul large spare parts andsupplies up to the station prior to the retirement of NASA's three-orbitershuttle fleet.

Herring said the launch schedule slips are not expected to impact the agency'sability to complete the international station by the presidential deadline.

Published under licensefrom FLORIDATODAY. Copyright ? 2006 FLORIDA TODAY. No portion of this material may bereproduced in any way without the written consent of FLORIDA TODAY.