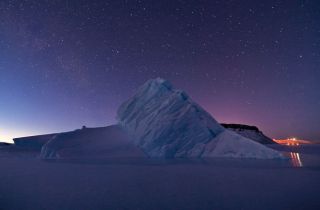 An iceberg appears frozen in place in a bay in Greenland.
(Image: © NASA)

Since the Arctic is getting warmer as a result of climate change, you'd expect that Greenland, the immense Danish territory situated on the edge of the Atlantic and Arctic oceans, would be warming too.

Strangely, though, Greenland actually cooled during the 1970s through the 1990s, a time when most of the Northern Hemisphere experienced rising temperatures.

An article just accepted for publication in the journal Geophysical Research Letters, reveals the reason for the seeming inconsistency: The paradoxical effect of solar weather on ocean circulation.

The new study, by a team of Danish, Swiss, American and Japanese researchers, concludes that high solar activity starting in the 1950s and continuing through the 1980s played a role in slowing down ocean circulation between the South Atlantic and the North Atlantic oceans. Combined with an influx of fresh water from melting glaciers, this slowdown halted warm water and air from reaching Greenland and cooled the island.

But that mitigation from global warming didn't last, and it's actually reversed itself. Conversely, the researchers' findings also suggest that weak solar activity, as the sun is currently experiencing, could slowly fire up the ocean circulation mechanism, increasing the amount of warm water and air flowing to Greenland. Starting around 2025, temperatures in Greenland could increase more than anticipated and the island's ice sheet could melt faster than projected.

This unexpected ice loss would compound projected sea-level rise expected to occur as a result of climate change, Kobashi said. The melting Greenland ice sheet accounted for one-third of the rise in global sea level every year from 1992 to 2011.

"We need to really consider how solar activity will change in the future," the study's lead author, University of Bern climate scientist Takuro Kobashi, said in a press release. "If solar activity becomes really low, as scientists expect, the Greenland ice sheet will melt faster than we expected from the climate model with just greenhouse gas (warming)."

The researchers studied ice cores drilled from Greenland's ice sheet to reconstruct temperatures for the past 2,100 years in 10-to-20-year increments. They found that Greenland generally vacillated, in sync with changes in the sun's energy output.