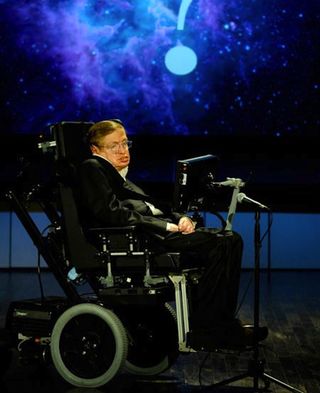 Stephen Hawking (shown here in 2008) has been vocal about fears that an advanced alien civilization might wipe out humanity.
(Image: © NASA/Paul Alers)

This week, famed physicist Stephen Hawking helped launch a major new effort to search for signs of intelligent alien life in the cosmos, even though he thinks it's likely that such creatures would try to destroy humanity.

Since at least 2010, Hawking has spoken publicly about his fears that an advanced alien civilization would have no problem wiping out the human race the way a human might wipe out a colony of ants. At the media event announcing the new project, he noted that human beings have a terrible history of mistreating, and even massacring, other human cultures that are less technologically advanced — why would an alien civilization be any different?

The new Breakthrough Listen initiative would only search for signs of intelligent life, not broadcast signals from Earth, and scientists other than Hawking have expressed concerns about hailing the attention of alien civilizations. However, a second initiative, Breakthrough Message, will host a competition open to anyone in the world, to make suggestions for the content of messages to be sent from humans to other intelligent beings.

"Such advanced aliens would perhaps become nomads, looking to conquer and colonize whatever planets they could reach," Hawking said in 2010 on an episode of "Into the Universe with Stephen Hawking," a TV show that aired on the Discovery Channel. "If so, it makes sense for them to exploit each new planet for material to build more spaceships so they could move on. Who knows what the limits would be?"

Hawking voiced his fears at the Breakthrough event, saying, "We don't know much about aliens, but we know about humans. If you look at history, contact between humans and less intelligent organisms have often been disastrous from their point of view, and encounters between civilizations with advanced versus primitive technologies have gone badly for the less advanced. A civilization reading one of our messages could be billions of years ahead of us. If so, they will be vastly more powerful, and may not see us as any more valuable than we see bacteria."

Ann Druyan, co-founder and CEO of Cosmos Studios, who was part of the announcement panel and will work on the Breakthrough Message initiative, seemed much more hopeful about the nature of an advanced alien civilization and the future of humanity.

"We may get to a period in our future where we outgrow our evolutionary baggage and evolve to become less violent and shortsighted," Druyan said at the media event. "My hope is that extraterrestrial civilizations are not only more technologically proficient than we are but more aware of the rarity and preciousness of life in the cosmos."

Jill Tarter, former director of the Center for SETI (Search for Extraterrestrial Intelligence) also has expressed opinions about alien civilizations that are in stark contrast to Hawking's.

"While Sir Stephen Hawking warned that alien life might try to conquer or colonize Earth, I respectfully disagree," Tarter said in a statement in 2012. "If aliens were to come here, it would be simply to explore. Considering the age of the universe, we probably wouldn't be their first extraterrestrial encounter, either.

"If aliens were able to visit Earth, that would mean they would have technological capabilities sophisticated enough not to need slaves, food or other planets," she added.

The new Breakthrough Listen initiative is scheduled to operate for 10 years and will search for signs of non-naturally occurring communications in both radio frequencies and laser transmissions. The initiative will scan the 1 million stars closest to Earth in the Milky Way, as well as the 100 closest galaxies.