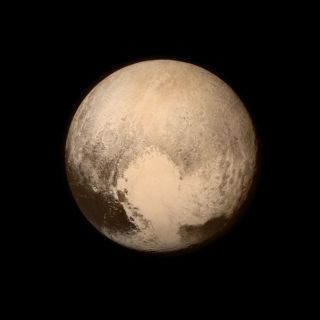 When NASA's New Horizons spacecraft made its closest approach to Pluto yesterday (July 14), becoming the first probe to study the dwarf planet up close, people around the world celebrated the historic moment.

Scientists and supporters around the world have already been reacting to the probe's historic close encounter with the once-ninth-planet of the solar system. Below are some initial reactions to the Pluto close encounter and flyby, from scientists, government officials and other interested parties. [New Horizons' Epic Pluto Flyby: Complete Coverage]

President Obama had this to say via his official Twitter account, @POTUS: "Pluto just had its first visitor! Thanks ‪@NASA — it's a great day for discovery and American leadership."

Neil deGrasse Tyson, astrophysicist and director of the Hayden Planetarium at the American Museum of Natural History (AMNH) in New York City

Tyson spoke about the flyby at an event held yesterday morning at AMNH celebrating the New Horizons flyby: "I've tussled with [New Horizons principal investigator] Alan Stern over Pluto's identity for many years, and he kept trying to say, 'We need to explore the last planet for the first time.' I never thought of it as the last planet — for several reasons. But rather than thinking of completing the reconnaissance of the nine planets, given our latter-day knowledge that there's this Kuiper belt of other icy bodies in the outer solar system, I viewed it as the first exploration of a new swath of real estate in the solar system recently identified as the Kuiper Belt. So that is far more open-ended than saying, 'Let us complete the reconnaissance of the nine planets.' And so, of course, we're agreeing that we need to explore Pluto. I've never been on the opposite side of that argument …

"To see a distant object for the first time [brings up] some of the oldest emotions humans have ever had, ever since we left the cave. 'What is on the other side of that valley? What is at the top of the mountain?' Somebody gets to do that and come back and tell everyone about it. Do you go there? Do you pitch a tent there? In those days, not everyone actually had that experience. It had to be communicated in some way, and then you would imagine it. Whereas here … the Web has given all of us equal access, equal chance to vicariously be explorers ourselves. And given how much we have explored, it's not every day where we get to see something for the first time that has never been seen by another human being. So, yes, this is a special moment. It is a special day, with nine years of anticipation that have led up to it." [Destination Pluto: NASA's New Horizons Mission in Pictures]

Stephen Hawking, theoretical physicist, cosmologist and director of research at the Centre for Theoretical Cosmology at University of Cambridge

Hawking delivered his reaction in a video message posted to Facebook: "I would like to congratulate the New Horizons team and NASA on their pioneering, decade-long mission to explore the Pluto system and the Kuiper Belt. Billions of miles from Earth, this little robotic spacecraft will show us the first glimpse of mysterious Pluto, the distant icy world at the very edge of our solar system. It is 50 years since the first successful mission to Mars, Mariner 4, sent back 21 images of the Red Planet. Now the solar system will be further opened to us, revealing the secrets of distant Pluto. The revelations of New Horizons may help us to understand better how our solar system was formed. We explore because we are human, and we want to know. I hope that Pluto will help us on that journey. I will be watching closely, and I hope you will, too."

In a statement from the Planetary Society, Nye had this to say: "This mission is a big deal for humankind. The interest in this part of the solar system couldn't be higher. Who hasn't wondered what Pluto is like? Congratulations to the project team and thanks to citizens everywhere who supported it. There's a lot of space between us — the Earth and this distant world — and New Horizons has crossed it. For the first time, we all see what's out there, up close. This is an extraordinary moment: reaching the next unexplored frontier in our solar system. Through the power of people — scientists, legislators and inspired space enthusiasts — our dream to explore our beloved dwarf planet is a reality."

Holdren made his thoughts known in a statement: "I’m delighted at this latest accomplishment by NASA, another first that demonstrates once again how the United States leads the world in space. New Horizons is the latest in a long line of scientific accomplishments at NASA, including multiple missions orbiting and exploring the surface of Mars in advance of human visits still to come; the remarkable Kepler mission to identify Earth-like planets around stars other than our own; and the DSCOVR satellite that soon will be beaming back images of the whole Earth in near real-time from a vantage point a million miles away. As New Horizons completes its flyby of Pluto and continues deeper into the Kuiper Belt, NASA's multifaceted journey of discovery continues."

Bolden spoke via a NASA statement: "The exploration of Pluto and its moons by New Horizons represents the capstone event to 50 years of planetary exploration by NASA and the United States. Once again we have achieved a historic first. The United States is the first nation to reach Pluto, and with this mission has completed the initial survey of our solar system, a remarkable accomplishment that no other nation can match." [Our Solar System: A Photo Tour of the Planets]

Grinspoon spoke at the live close-encounter event at AMNH this morning: "It's one of those moments. I remember being in fourth grade for the Apollo 11 landing on the moon and being 16 years old when Viking landed on Mars and being a young post-doc during Voyager at Neptune, and those moments are etched into my brain. I can feel that this is one of those moments now where we've expanded our consciousness. We've reached not just another world but another zone of reality, of our universe. And it's just amazing to be here with the people that are making this happen, and experiencing the real-time thrill of it all.

"It's very gratifying because these people on this mission are my great friends from 20, 30 years ago that I went to grad school with. We were the kids, and now it feels like this is our generation of planetary scientists, in a sense, and our mission. They're all multi-generational, but I feel like a sort of torch being passed, and I'm really proud of the team and the scientists and I'm so excited and as a human being I feel we have now expanded our awareness of the universe we live in."

Stallmer delivered his reaction in a statement from CSF: "CSF applauds Alan Stern and his team for their hard work, dedication and patience that they have displayed throughout this program. It is heartening to see the benefits that are already being reaped as well as the excitement that New Horizons has garnered around the globe. Through Alan's work at the Southwest Research Institute, World View and Golden Spike, he continues to push the boundaries of the commercial spaceflight industry to ever-higher horizons. We are lucky to have his scientific expertise within our industry."