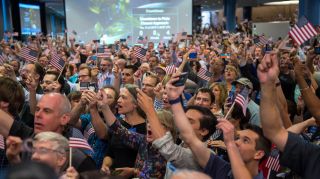 When the New Horizons spacecraft made its historic Pluto flyby today (July 14) after more than nine years in transit, the moment came with the obligatory NASA countdown. Alan Stern, the principal investigator for the mission, led a crowd of nearly 1,200 people in a countdown to 7:49 a.m. EDT (1149 GMT) — the time of closest approach, when New Horizons zoomed within 7,800 miles (12,500 kilometers) of Pluto's surface.

According to NASA spokesman Dwayne Brown, who gave a hushed commentary during the countdown, there were even tears on the faces of some attendees, many of whom had worked for well over a decade to make New Horizons' Pluto flyby a reality. [New Horizons' Epic Pluto Flyby: Complete Coverage]

"It was my favorite part," 9-year-old Brandon Naylor of Los Angeles told me afterward. "Because it meant the flyby happened."

Technically, Brandon is 9.5 years old. He is one of the Pluto Pals, a handful of kids born on Jan. 19, 2006 — the same day New Horizons launched into space — who are experiencing the Pluto flyby firsthand here at the mission's home base at the Johns Hopkins University Applied Physics Laboratory.

Brandon, with a NASA sticker on his shirt and a flag in hand, wrote a letter to Stern personally to ask about Pluto and New Horizons, which led to his invitation. "Earth is my favorite planet, but if we're counting dwarf planets, then Pluto is my favorite," Brandon said.

"It was a once-in-a-lifetime experience," Bret Naylor, Brandon's father, said when I asked why he would bring Brandon and the rest of their family (wife Michelle, 5-year-old daughter Maya and grandmother Doreen) across the country for such an event. "I knew that this would only happen once, and to miss it would be such a lost opportunity because we won't ever fly past Pluto for the first time again."

The Naylors' festive mood for Pluto and New Horizons mirrors that of the multitude attending the flyby event this week. And it is infectious. There are New Horizons hats to wear. The press corps played a game of New Horizons Bingo to win a mission shot glass (Miriam Kramer of Mashable won the contest) and the scientists, it seems, have rock-star status during packed, standing-room-only panel discussions. [Pluto Flyby! The Celebration at Mission Control (Video)]

"I don't want to overstate it, but I think this was a really historic moment in that we have explored our solar system," John Grunsfeld, NASA's associate administrator for science missions, told reporters after the flyby.

"I think historians will look back at this time and think this was truly the golden age, or the classic age, of space exploration," Grunsfeld said. "We have our first map of Pluto."

Well, maybe yes and maybe no.

Just after the flyby moment, New Horizons scientists unveiled the latest photo of Pluto, revealing a dazzling red-hued world at the edge of our solar system. The photo, which New Horizons sent to Earth late Monday (July 13), was the best view the probe could get of the dwarf planet before today's flyby.

But it takes 4.5 hours for signals from New Horizons to traverse the distance between the Pluto system and Earth. And just after the flyby, the probe had a slew of observations to make of the nightside of both Pluto and its largest moon, Charon. The probe is not supposed to phone a status report home until 4:20 p.m. EDT (2020 GMT) today. That signal will take another 4.5 hours to reach Earth.

Only around 9 p.m. EDT (0100 Wednesday GMT) will Stern and the rest of the New Horizons team know if the flyby went OK, or if the probe was hit by rocky debris from Pluto's five moons (four of which were discovered during the probe's trip, or in the immediate leadup to it).

Stern has said there's a 1-in-10,000 chance of New Horizons suffering such a fate.

"While I don't lose sleep over this," Stern said on Monday, "the fact is, tomorrow evening there's going to be a little bit of drama."

"I haven't had very much sleep," Bowman said. "And we always talk about the spacecraft as being a child, a baby, a teenager. And we lost signal as planned and there was absolutely nothing anybody on the operations team could do but just to trust that we had prepared it well and set off on its journey on its own."

So now, it's a waiting game.

Yesterday, while having breakfast in my hotel, I met Bob Parizek of Boulder, Colorado. A retired Ball Aerospace engineer, Parizek served as Ball's program manager for the sensitive Ralph instrument on New Horizons, essentially the probe's "eyes." Parizek isn't part of the active New Horizons team now, but he had to come see how his instrument fared during the flyby. He even brought his grown son along for the ride.

"Talk about delayed gratification," Parizek told me. "I have a smile on my face, but my fingers crossed."

Today, Grunsfeld did Parizek one better in the flexibility department.

"We are crossing all our fingers, and all our toes," he said.