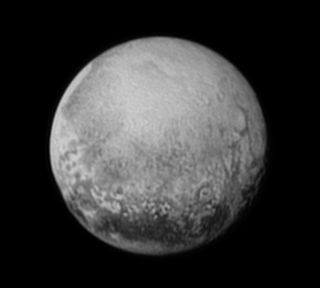 Image of Pluto captured by NASA's New Horizons spacecraft on July 11, 2015. The photo shows linear features that may be cliffs, as well as a large circular feature that could be an impact crater.
(Image: © NASA/Johns Hopkins University Applied Physics Laboratory/Southwest Research Institute)

The long wait is almost over.

On Tuesday morning (July 14) — nine and a half years after launching, and a quarter-century after its mission began to take shape — NASA's New Horizons spacecraft will perform history's first flyby of Pluto. Closest approach will occur at 7:49 a.m. EDT (1149 GMT) Tuesday, when New Horizons zooms within just 7,800 miles (12,500 kilometers) of the dwarf planet's frigid surface.

On Sunday, NASA and New Horizons scientists unveiled the latest photos from New Horizons, including a tantalizing view of what appear to be canyons and craters on Pluto's big moon Charon, and a new view of the dwarf planet itself. You can see a video of New Horizons' latest Pluto views here.

The $723 million New Horizons mission launched in January 2006 to take the measure of Pluto, which has remained mysterious since its 1930 discovery, because it's relatively small and lies so far away. (The dwarf planet orbits about 39 times farther from the sun than Earth does, on average.)

But Stern and others began formulating the Pluto mission concept way back in 1989, the same year that NASA's Voyager 2 probe cruised past Neptune. That flyby a generation ago marked the last time humanity got its first up-close look at a planet — and left Pluto as the only planet in the solar system yet to receive a spacecraft visit. (The International Astronomical Union officially reclassifed Pluto as a "dwarf planet" in 2006, however.)

New Horizons is "a capstone mission," New Horizons project manager Glen Fountain, of the Johns Hopkins University Applied Physics Lab in Laurel, Maryland, told Space.com. "It is the completion of this initial reconnaissance of our solar system."

The piano-size New Horizons carries seven different scientific instruments, which the probe is using to study Pluto; its largest moon, Charon; and, to a lesser extent, the other four satellites found in the system (all of which are tiny). (Charon is about half as wide as Pluto itself; many researchers regard the pair as a binary system.)

If all goes according to plan during the flyby Tuesday, New Horizons will map the surfaces of Pluto and Charon in detail, study the two objects' geology, characterize Pluto's wispy atmosphere and perform a number of other investigations.

The close-approach images will be spectacular; New Horizons should be able to discern features on Pluto as small as the ponds in New York City's Central Park, mission team members have said.

Images captured by New Horizons over the past few weeks have already begun bringing Pluto and Charon into focus, and heightened anticipation for the supersharp photos to come.

For example, the probe's observations have revealed that Pluto's surface is complex and varied, with many different bright patches (including a huge, heart-shaped one) and dark features (including a giant one mission scientists have dubbed "the whale," as well as a series of curious dark blotches lined up along the dwarf planet's equator).

"When we get a clear look at the surface of Pluto for the very first time, I promise, it will knock your socks off," Stern said in a statement earlier this month.

Visit Space.com each day this week for the latest news on the Pluto Flyby and New Horizons.