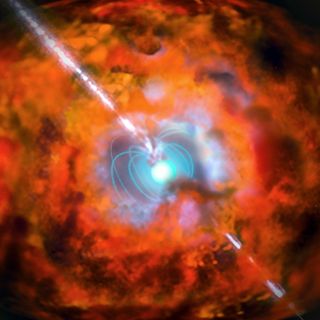 This artist’s impression shows a supernova and associated gamma-ray burst driven by a rapidly spinning neutron star with a very strong magnetic field — an exotic object known as a magnetar.
(Image: © ESO)

One of the most powerful cosmic explosions ever observed by astronomers may have been powered by a massive, incredibly strong magnetic object, new research suggests.

Gamma-ray bursts are like universal fireworks: intense outbursts of high-energy light that have been detected coming from many different places in the sky. These blowouts are the most powerful explosions in the universe, giving off as much energy as the sun during its entire 10-billion-year lifetime in anywhere from milliseconds to minutes.

Scientists suspect that there are at least two different sources of gamma-ray bursts. A new study looking at one of the longest and most intense bursts ever detected suggests there may be another source: a magnetic hunk of material only a few tens of miles across, but with a magnetic field 5,000 trillion times that of Earth. [Top 10 Strangest Things in Space]

Gamma-ray bursts are traditionally divided into two groups — long and short — depending on whether they last more or less than 2 seconds. Short gamma-ray bursts are most likely caused by the mergers of neutron stars, which are dense remnants of dead stars, while long gamma ray-bursts are linked with supernovas, which are cataclysmic explosions accompanying the deaths of massive stars.

To learn more about these ultra-long gamma-ray bursts, the authors of the new research focused on one named GRB 111209A, which was detected by NASA's Swift satellite in 2011. It was both one of the longest and brightest gamma-ray bursts ever seen, lasting at least 15,400 seconds and giving off more than 500 times more energy than the sun is expected to during its lifetime.

As the afterglow from this burst faded, the researchers analyzed it using the GROND instrument on the MPG/ESO 2.2-meter telescope and the X-shooter instrument on the Very Large Telescope, both part of the European Southern Observatory in Chile. They detected the clear signature of a supernova — later named SN 2011kl — marking the first time that a supernova has been associated with an ultra-long gamma-ray burst. The supernova took place about 6.3 billion years ago and about 13 billion light-years away from Earth, and was caused by the death of a star 8 to 25 times the mass of the sun.

According to the authors of the new research, astronomers previously thought that the supernovas that probably cause long gamma-ray bursts eventually collapse into black holes. However, the spectrum of light seen from SN 2011kl differs from that usually seen in the aftermath of explosions that lead to black holes — for example, the spectrum from SN 2011kl is low in the kind of light given off by radioactive nickel. In addition, SN 2011kl was also more than three times as luminous as the kind of supernova associated with normal long gamma-ray bursts.

Instead, the researchers suggest the supernova that gave rise to this ultra-long gamma-ray burst created an extraordinarily magnetic, rapidly spinning kind of neutron star known as a magnetar, which possesses magnetic fields up to approximately 5,000 trillion times that of the Earth's.

"The magnetic field is about 100 times stronger than in usual neutron stars," study lead author Jochen Greiner, an astrophysicist at the Max Planck Institute for Extraterrestrial Physics in Garching, Germany, told Space.com.

Magnetars are linked to super-bright forms of supernova similar to the kind that caused this ultra-long gamma-ray burst. "This finding brings us much closer to a new and clearer picture of the workings of gamma-ray bursts," Greiner said in a statement.

The scientists detailed their findings in tomorrow's (July 9) issue of the journal Nature.