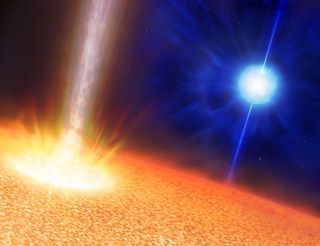 An artist’s impression of the stars creating gamma-ray bursts. The background blue star is the progenitor of a standard long duration gamma-ray burst. Image released April 16, 2013.
(Image: © Copyright Mark A. Garlick, used with permission by the University of Warwick)

A new type of powerful, long-lasting explosion deep in space may be the death knell of gigantic stars, scientists say.

Star explosions (called supernovas) can give off high-powered flashes of radiation known as gamma-ray bursts. These bursts usually fall into two categories: ones that last less than two seconds, and ones that last for several minutes. But this new type of explosion can create a gamma-ray burst that goes on for much longer — up to several hours.

"These events are amongst the biggest explosions in nature, yet we’re only just beginning to find them," astronomer Andrew Levan of the University of Warwick in the United Kingdom said in a statement. "It really shows us that the universe is a much more violent and varied place than we’d imagined." [See Amazing Photos of Supernovas]

Astronomers spied the first of these odd bursts — which lasted half an hour — on Dec. 25, 2010. Scientists did not know how far away the source was, but they offered two possible explanations for the origin of the Christmas Day burst.

One theory suggested that the burst came from an asteroid or comet in our galaxy being ripped apart by the gravity of a dense neutron star (the collapsed stellar remnant of a supernova). Another theory held that a supernova in a galaxy 3.5 billion light-years away caused the explosive rays.

Now, after studying several examples of such cosmic blasts, Levan and his colleagues have found that the Christmas Day burst occurred in a galaxy much more distant than previously thought.

The researchers used data collected with the Gemini Telescope in Hawaii to calculate that the lengthy gamma-ray burst had a "redshift" of 0.847, which translates to a distance of 7 billion light-years away, or about halfway to the edge of the observable universe.

Given the burst's location, Levan and colleagues think it was caused by a star known as a supergiant, which started out with 20 times the mass of the sun and grew to contain as much as 1,000 solar masses. At that size, it would have a radius of 1 billion miles (1.6 billion kilometers), making it one of the biggest and brightest stars in the universe.

The abnormally long duration of the Christmas Day burst and several others may be due to the enormous size of the supergiants when they exploded, the scientists theorize.

More common, relatively short types of gamma-ray bursts are caused by a star collapsing into a black hole at its center. As the black hole sucks in matter, some of that matter escapes and forms a jet of energy that streams out in two directions, generating gamma rays.

The jets of matter must travel very close to the speed of light in order to escape the black hole's gravity, so they ripple through the star in just a few seconds. In a supergiant, however, the explosion has to travel through much more material, resulting in a longer burst.

Levan and his team's findings were presented today (April 16) at the Gamma Ray Burst 2013 Symposium in Nashville, Tenn.