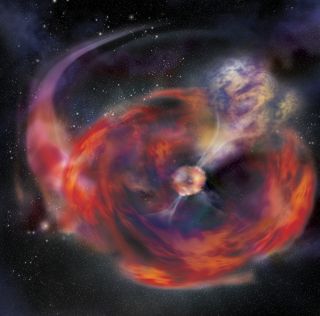 The Christmas sky last year was lit up by an extraordinarily powerful and mysteriously long-lasting explosion in space that scientists now suggest was a comet smacking into a dense star or a peculiar supernova death.

Radiation from gamma-ray bursts, the most powerful explosions ever seen in the universe, strikes Earth's atmosphere from random directions in space about twice a day. These bursts can be roughly divided into two kinds, ones lasting less than two seconds, and ones lasting up to minutes.

However, the strange gamma-ray burst detected on Christmas Day 2010 by NASA's Swift satellite lasted at least half an hour.

Scientists think shorter gamma-ray bursts are generally caused by merging neutron stars — dead stars made up of super-dense neutron matter. Longer bursts are typically thought to originate from hypernovas, in which giant stars that explode as incredibly powerful supernovas spew two opposing jets of energy as they die; we see them head-on as bursts.  [Photos of Great Supernova Explosions]

However, researchers suspect a number of mysterious events of completely different origins could mimic gamma-ray bursts. Such might be the case with the Christmas burst, formally known as GRB 101225A.

"It is important to understand gamma-ray bursts to get some global picture of the life and death of massive stars," said astronomer Christina Thöne of the Institute of Astrophysics in Andalusia, Spain. "Massive stars are ultimately the ones that decide what elements are present, created and recycled in the gas in our and any other galaxy."

Now scientists have two competing explanations for the Christmas burst: a cosmic impact on a dead star in our galaxy, or a peculiar supernova in a distant galaxy.

Based on the length and brightness of the burst, astrophysicist Sergio Campana at the Astronomical Observatory of Brera in Italy and his colleagues suggest that a minor body such as a comet or asteroid crashed into a neutron star.

"I think this is the discovery of a completely new astrophysical phenomenon that has not been envisaged before," Campana told SPACE.com.

Specifically, the astrophysicists suggest that the gravity of a neutron star ripped apart a 500 trillion-metric-ton chunk of matter that had been passing within 3,000 miles (5,000 kilometers) of it. The debris fell onto the star and exploded as energy.

"If tidal disruption of minor bodies around neutron stars is really happening, I would expect GRB 101225A not [to] be unique," Campana said. "I would like to start searching for this kind of event either in existing data sets or with new observations."

On the other hand, Thöne and her colleagues say an oddball supernova might be to blame. They propose that the Christmas explosion occurred when a neutron star combined with a helium star, a type of super-giant star rich in helium. When the neutron star and the helium star's core merged, the result would have been a black hole or a highly magnetic neutron star known as a magnetar, either of which might power long bursts of radiation. The helium star would have shed its outer layers first, surrounding the duo in an envelope of gas — which could explain unusual details seen in the burst's light.

To test which explanation might be correct, scientists must figure out if the explosion took place in our galaxy or not. Thöne and her colleagues observed signs that it took place in a distant galaxy, but the evidence is ambiguous, they noted. Further observations with the Hubble Space Telescope and other observatories could help solve the mystery.

"We hope to settle the question on the right model sometime in the future," Thöne said. "Hopefully sometime next year we will know more."

The scientists detailed their findings in two papers published in the Dec. 1 issue of the journal Nature.